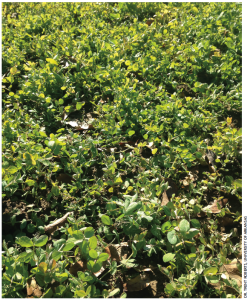 Trent Roberts, a University of Arkansas soil scientist, is out to be a myth-buster when it comes to cover crops and rice.

“I think one of the biggest benefits of this is the potential reduction in fertilizer needs, and that’s something we’ll be able to easily document because we know what the producers have historically needed to apply,” he says.

What won’t be as easy to separate out are some of cover crops’ intangible perks, such as controlling erosion, aiding soil compaction, increasing soil organic matter and helping manage herbicide-resistant weeds.

“I think cover crops are going to be even more important as we move into the future and we start having to really implement sustainable practices,” Roberts says. “They are going to be a big tool in our tool kit to maintain our production in the next 100 years.”

But he isn’t the only one looking at how cover crops might fit into a rice-production system. 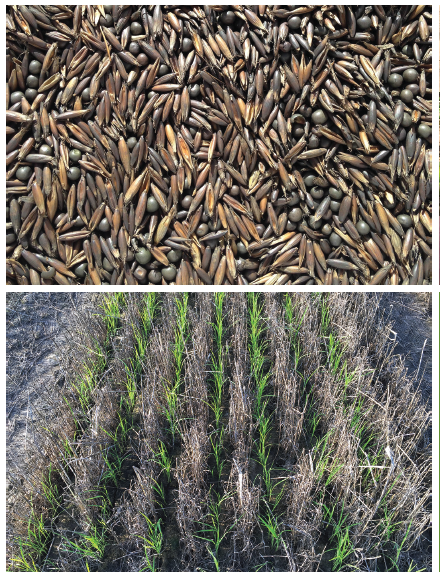 Roberts’ project is being funded by a Natural Resources Conservation Service Conservation Innovation Grant of $75,000, which carried a 50-percent matching-fund requirement. RiceTec Inc. and CPS together provided the $75,000 match.

Based on three years of small-plot trials at Rohwer, Pine Tree and Stuttgart research stations, Roberts says he selected Austrian winter peas because they performed well at all three locations and seemed well suited to rice soils and growing conductions.

Austrian winter peas also produce a large amount of biomass, and the plant residue breaks down rapidly so it isn’t a hindrance to spring field preparation.

As a “shot in the dark,” he threw in black oats to deter waterfowl feeding. Although waterfowl like peas, he says they don’t like oats. The theory is the oats will emerge and grow taller than the peas, creating undesirable stubble.

To get the most from the cover crop, growers need to plant by Oct. 15. That allows for plant establishment before colder temperatures slow growth. Most of the growth actually occurs in late winter and early spring as temperatures warm.

“The biggest thing is for it to produce a lot of biomass, which equates to a lot of N credits, in a relatively short period of time,” Roberts says. 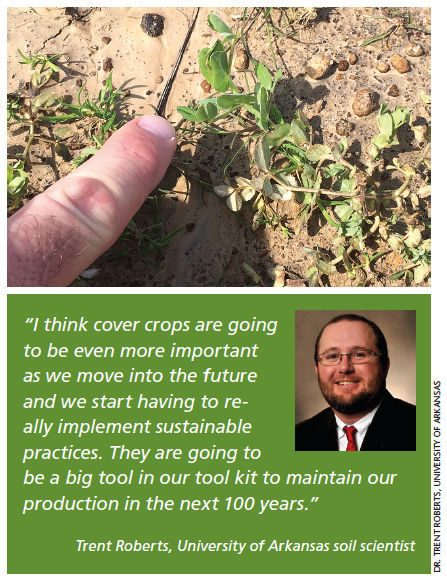 In the colder parts of Arkansas, he says the crop could produce about 40 to 50 units of nitrogen per acre. In the southern parts that rarely see a freeze, the crop could yield 80 to 100 units. Because Austrian peas break down rapidly, between 50 and 75 percent of the nitrogen could be available to the crop during the first year.

Weather-related change of plans
Roberts had planned to work with three growers last fall, but Mother Nature had other ideas. Initially, the ground was too dry to plant, so he waited. Then torrential rains came, and only one 24-acre field farmed by Fred Schmidt near Walnut Ridge was planted before conditions became too wet.

Schmidt had done some dirt work, so the field was fallow. The cover crop was no-till drilled into the soil. Shortly before planting in the spring, he will use a burn-down herbicide to kill it, then disk it under as part of field preparation.

Once the rice crop is planted, Roberts will collect soil samples at about the two- to three-leaf stage and use the university’s N-STaR soil test results so Schmidt can adjust his nitrogen accordingly.

The cost to plant the cover crop, including seed, pea inoculant and drilling, was about $30 to $35 per acre.
Each demonstration field will be monitored for three years, and production will be compared to a sister field that is managed similarly by the cooperator except for the cover crop. Roberts points out that the project is a demonstration, so it won’t involve replicated plots. Nevertheless, it should provide growers with useful information.

When possible, he says he plans to host grower tours or field days. The challenge will be timing, since the cover crop is most robust in early spring when most growers are busy with field preparation.

Weather permitting, Roberts says this fall he plans to enlist the two producers in Arkansas and Jefferson counties who were scheduled to plant in 2015 but couldn’t as well as three others to seed cover crops.

Cover crops and organic rice
Meanwhile, researchers with the multi-state organic rice IPM project are evaluating crimson clover, annual ryegrass and brassica mustard cover crops. They planted their first cover crops in late fall 2015 at Beaumont and at Pine Bluff, Ark. Part of the research will examine their interactions with disease, weed and insect pests. Researchers also plan to quantify the cover crop’s nitrogen contribution to the soil.

Zhou says very few Texas producers of conventional rice plant cover crops because of economic concerns. Instead, they flood fields for waterfowl or possibly plant clovers or other legumes for cattle grazing.

“But with organic rice, it’s different,” he says. “They have no choice” since they can’t use any synthetic fertilizers.