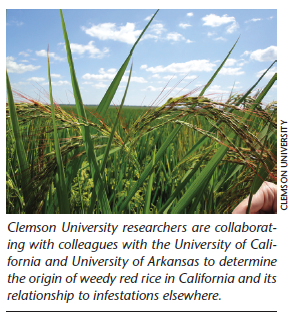 California’s battle with red rice is reminiscent of Jack Nicholson’s famous quote from “The Shining” — “I’m back!”

The state, which prides itself on having zero red rice tolerance, in 2003 identified six fields in Glenn and Colusa counties infested with the weed. An eradication program was undertaken against what some also refer to as “weedy rice.”

“When I came here 10 years ago, I was under the impression that it was taken care of, but that wasn’t the case,” says Timothy Blank, certified seed program representative with the California Crop Improvement Association. “We know of three populations in six fields, but I know there are more because I’ve been told there are more by growers.”

Speaking at a recent University of California Cooperative Extension winter rice meeting, Blank emphasized the need to nip the problem in the bud before it becomes widespread as it is in the South.

Not only can a severe infestation reduce overall rice yields by outcompeting commercial rice plants, but it also can affect milling yields and increase dockage. As the name implies, red rice kernels tend to be reddish in color and are something that commercial mills don’t want.

Is it red rice or commercial rice?

One of the challenges with identifying a problem in a field is that weedy rice is either the same genus and species as commercial rice — Oryza sativa — or a close relative. Early in the growing season, red rice plants may look like lighter colored commercial rice.

As the season progresses, red rice plants tend to have a wider canopy, grow taller and have several times more tillers than their commercial counterparts. By the time red rice tillers are fully developed, about 65 percent of the panicles have shattered, dropping kernels in the field. These seeds can remain dormant in fields for up to 12 years.

A light infestation of red rice also may be confused with watergrass, Echinochloa spp. But Blank says red rice has ligules and auricles – membranes that go around the junction of the collar and the blade – and watergrass doesn’t.

Prevention is the best control method, including the use of only certified rice seed produced in California and never planting seed grown elsewhere, he says.

Blank also encouraged California producers who buy used equipment from the South to make sure it is cleaned thoroughly before bringing it back.

If growers suspect red rice, Blank urged them to call their local farm adviser or pest control adviser for identification. With the red rice infestations remaining localized, he says he’s confident the weed can be eradicated as it was in the 1930s.

“It’s been done before, and it can be done again,” Blank says. “If you don’t have red rice, just be on the look out and know it’s out there.”

For a photo guide on how to identify red rice, visit http://bit.ly/1lOUwXC.