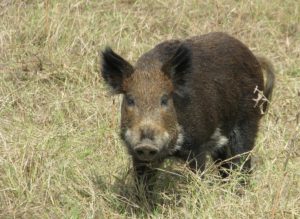 Expanding wild hog populations and the increasing damage they cause have made the news recently with headlines like “World War III” or “When Pigs Go Wild.”

Although wildlife experts may not go quite that far, they nonetheless say the four-footed pests are becoming more of a costly problem for agricultural and urban landowners alike. At the same time, wild hogs can pose traffic hazards as they cross roads; carry diseases that may spread to livestock; compete with native wildlife; and cause environmental damage to land, forests and riparian areas.

“The population has been expanding both in range and numbers for the last three decades,” says Billy Higginbotham, professor emeritus with Texas A&M AgriLife Research & Extension Center in Overton. “Regardless of the type of ag damage, most everyone will tell you that it’s more of a problem now than previously. Especially if you look at the last 15-20-25-year range, the population has increased.”

To gain the upper hand on wild pigs, land owners and managers will need a long-term concerted program that involves aerial shooting or large-scale trapping, depending on terrain, he says. But it shouldn’t involve both simultaneously because they can be counterproductive.

And wild pig management is a continuing process, much like mowing your lawn or getting a hair cut.

“If you remove the pigs and stop and don’t continue management to rid the site, those pigs can start rebounding,” Higginbotham says. “So it’s very important to keep looking for sign. When you see the pigs have shown up based on sign, then start back up with your control methods. You want to watch for sign and react before damage occurs.”

Those signs include footprints, scat, wallowing, rooting and rubbing.

Timothy Gertson, who farms rice and other row crops near Lissie, Texas, says hogs are a continual challenge and the reason he doesn’t grow organic corn any more.

“It’s a very frustrating problem,” he says. Rice fields near creeks or those near fallow fields that have grown up tend to attract hogs more than other fields. The problem has become so common that Gertson has to have a worker repair hog-damaged levees almost daily. 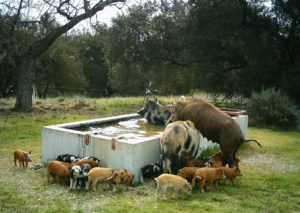 Wild pigs, also called feral hogs, were first introduced to the New World by the Spanish explorers in the mid-1500s.
Although feral hogs would have continued to expand territory slowly on their own, human intervention in the form of trapping and transplanting for managed pig hunts from the 1970s through the 1990s hastened their spread in Texas and many other states, Higginbotham says.

The practice, where transplanted hogs are released into a fenced-in area for subsequent hunting, is illegal in most states because the fencing may not be sound and hogs can escape. However, in Texas wild pig males can legally be released in stated-inspected and permitted hunting preserves that have fences to prevent their escape into surrounding areas.

Some Texas wildlife managers also have pointed to the increasing practice of deer feeders for hunting since deer and wild hogs typically occupy the same habitat as a factor in expanding and increasing pig populations. Female hogs who feed on nutritious deer corn and protein supplements may have larger and healthier litters, allowing more piglets to survive to adulthood and contribute to population growth.

Fortunately, research conducted by Texas A&M AgriLife Extension has shown that fencing around deer feeding stations with 34 inch high swine panels can prevent pig access to feed without disrupting the deer’s use of the supplement. Therefore, all hunters using feeders in wild pig habitat are encouraged to build these pig excluders around their feeders.

Wild hogs are intelligent opportunists with a wide-ranging diet. They also easily adapt to different environments, aiding in their habitat expansion. Wild hogs also have responded to human pressure by becoming increasingly nocturnal to avoid shooting. In addition, they frequent areas near water, especially in riparian areas with abundant security cover.
Although the exact number of wild hogs isn’t known, Higginbotham says a guesstimate is 8 million to 9 million nationwide, with about 2.6 million living in Texas.

A conservative estimate of wild hog damage to Texas agriculture alone is $52 million annually, with an additional $7 million annually spent by landowners on controlling the pest and fixing damage.

In Louisiana, which has an estimated 700,000 wild pigs, they cause about $76 million in damages to agricultural crops, says Jim LaCour, a veterinarian with the Louisiana Department of Wildlife and Fisheries. That doesn’t count the damage they cause to forestry, riparian and other non-agricultural properties. 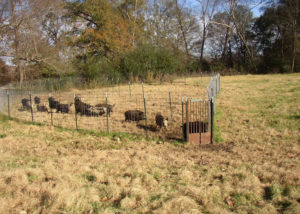 In most states, wild hogs can be legally managed year-round on private property by shooting, snaring or trapping. Higginbotham says snaring can be effective but is too time consuming and since snares must be checked daily and each snare only removes one pig at a time.

That leaves aerial gunning and trapping. In areas with dense canopies, such as in East Texas, aerial shooting isn’t as effective as it is in open terrain where the hogs are easier to see.

In wooded areas, Higginbotham says corral trapping that targets an entire group, or sounder, may be more successful.

Because of wild hogs’ intelligence, trapping isn’t as simple as setting up a baited trap. It involves using game cameras, scouting and pre-baiting to determine where hogs usually feed.
Then you need to erect a corral trap slowly so they get used to it. With the trip gate up, place bait just inside the trap, slowly moving it deeper and to the back.

Once the entire group has become habituated to the trap, then the gate can be closed using either a mechanical trigger such as an old car tire or a cell-phone activated trigger. The goal is to catch the entire group in one session. For complete instructions on building an effective corral trap for approximately $500, visit Texas A&M AgriLife Extension’s feral hog website at http://agrilife.org/feralhogs/files/2010/05/CorralTraps.pdf.

LaCour says different control methods work better at different times of the year, too. Traps baited with corn, for example, may not be as attractive during the summer when acres of cultivated corn are more enticing than a handful of grain.

Depending on the fields, Gertson says they’ve used aerial gunning, where someone shoots hogs from a helicopter as well as cell-phone-controlled traps with minimal success.

“There’s nothing we’ve done that really has put much of a dent in the problem,” he says. “We more or less see a temporary lull, that’s it.”

Combining all control methods, Texas was removing about 29 percent — or 760,000 — of the total wild hog population annually based on a 2010 survey.

Although those may sound like large numbers, consider that one female hog averages 1.5 litters annually with six piglets per litter.

“We need to be removing about two-thirds just to end up with the same number of pigs we started the year with,” Higginbotham says.

In Louisiana, as much as 70 percent of the wild hog population may need to be removed annually just to stay even with the high reproductive rates, LaCour says.

Another challenge controlling the pests is most are found on private property, where management is up to the landowner.

“And some people actually want hogs on their places to hunt. But they just act as reservoirs, adding to lands adjacent to the hogs,” he says.

The Environmental Protection Agency registered Kaput, a toxicant that contained Warfarin, in early 2017. Warfarin, an anti-coagulant, has been used to control rodents for decades.

The Texas Department of Agriculture subsequently registered Kaput, only to have the registrant, Scimetrics Ltd Corp. of Wellington, Colorado, pull it a few months later over concerns of lawsuits amid the Texas Legislature’s call for more research before any wild pig toxicant could be used in Texas.

Researchers continue to look for other toxicants, most notably sodium nitrite. Used as a preservative in food products, including bacon, sodium nitrite causes rapid depletion of oxygen to the brain and vital organs when hogs eat it. They die within 1.5 hours of consumption.

Even if the EPA and state regulators eventually approve a toxicant, LaCour says it won’t be a silver bullet. Instead, it should be used as part of an integrated management program.

“We’re not making much progress until we have another tool, something that can provide birth control, to reduce that high reproductive rate. But the toxicants can help reduce the numbers,” he says.