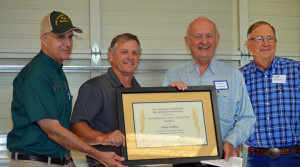 Homer Lundberg, who with his three older brothers founded Lundberg Family Farms in Richvale, Calif., was honored at the recent California Rice Field Day for his decades of service to the rice industry and his community.

The Lundberg family, led by parents Albert and Frances, moved to the Northern Sacramento Valley from Nebraska in 1937 and began farming near Richvale. At the time, Homer was 2 years old.

After attending college and serving in the Air Force, Homer returned to the farm in 1959.

Over the years, the family adopted conservation practices and began growing organically. Long before the California Air Resources Board began phasing out open-field burning of rice straw in 1992, the Lundbergs were flooding fields in the fall and rolling rice straw to aid winter decomposition.

In 1969, they started milling their own organic brown rice and founded a company that eventually would become Lundberg Family Farms. Joining Homer in the company were his brothers Eldon, Harlan and Wendell, who are now deceased.

Homer Lundberg rose through the company ranks to chairman, a position he held until stepping down in 2006 to allow the third generation to take over.

Homer Lundberg was active in the rice industry, having served on the board of the Butte County Rice Association for eight years and the California Rice Research Foundation Board for 17 years. Unlike experiment stations in other states, the California Cooperative Rice Experiment Station is owned by the foundation, which is funded by grower assessments.

In 1985, the Lundbergs were members of a committee that formed the Western Canal Water District, having purchased the system from Pacific Gas & Electric. During the 1990s, the district eliminated diversion dams to allow free run of migrating salmon. The district encompasses about 67,000 acres.

Homer Lundberg also served on the California State Water Commission as an appointee of then-Gov. Pete Wilson. In addition, he has been active in several local community groups.

In receiving the honor at the annual Rice Field Day, Aug. 31, Lundberg said he was humbled by the award and grateful for predecessors who established the rice experiment station.

“Someone had the genius and audacity to experiment with rice,” he said. “They put together a cooperative rice research station that cooperates with the USDA and UC and the growers to keep us on the cutting edge of science and technology, and I am so grateful for that.”

He also pointed to the risk-takers who saw the northern valley’s heavy clay adobe soils not as a hindrance but as an opportunity.

“We’ve been able to stand on the shoulders of giants who have worked hard and put up their wherewithal to make rice farming what it is today.”