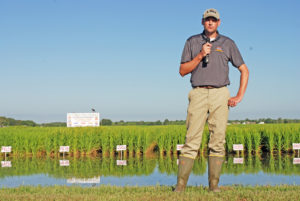 LSU AgCenter rice breeder Adam Famoso discusses varieties he has in the pipeline.

The Louisiana State University AgCenter rice breeding program isn’t resting on its laurels after the successful release of PVL01, the first variety with tolerance to Provisia herbicide. In the pipeline are PVL108, which makes up for some of the shortcomings of PVL01, as well as a number of conventional varieties and hybrids.

Breeders were joined by other rice-production experts to show off their research during the recent AgCenter Rice Field Day at the H. Rouse Caffey Rice Research Station near Crowley.

PVL01 was brought to market on a fast track of only five years, says AgCenter rice breeder Adam Famoso. Typically, it takes breeders eight to 10 years to develop a variety.

PVL108, a sibling of PVL01, has shown about a 10 percent yield advantage in three years of statewide testing.
It has the same low chalk as its sibling but not quite as long a kernel.

At 7 millimeters, PVL01 has one of the longest kernels on the market. PVL108 has a shorter kernel, but it is still considered a long-grain variety and has the long-grain cooking qualities.

PVL108 is about five to seven days earlier than its sibling and about 2 inches taller. It has similar disease susceptibility as PVL01, so plan on a fungicide spray.

During the 2017-18 winter, LSU did a small seed increase in Puerto Rico and has about 5 acres of foundation seed planted at 9-10 pounds per acre at Crowley.

“At the end of this year, we’ll make the decision on whether to move forward with 108,” Famoso says. Should that be releasing the variety, seed producers would have access to seed for the 2019 season.

At the same time, Famoso says, he has four more Provisia lines that are undergoing their first year of testing. They have improved blast resistance.

“This is a step-wise process to get the material adapted to our environment over five to 10 years,” he says, comparing it to the progression of the Clearfield varieties.

CLJ01, a Clearfield jasmine, was released on a limited basis this season. It has low chalk and about a 30 percent yield advantage over Jazzman 2, an aromatic variety previous released by the AgCenter.

“Certainly it gets closer to how our CL111 or 151 perform,” Famoso says of CLJ01’s yield potential.

Xueyan Sha, a University of Arkansas Rice breeder who used to work at the AgCenter, was invited to discuss his breeding work with Clearfield varieties.

CLX1111 has the pitA gene, which imparts natural resistance to rice blast. Although CLX1133 doesn’t have the pitA gene, it is a vigorous plant with tolerance to bacterial panicle blight.

“If anything stands out, we may be looking at releasing it very soon,” Sha says.

AgCenter breeders are not turning their back on conventional pure-line development, either. Famoso says he has two conventional long-grains in their second year of testing. If they continue performing as they have, they could be released commercially in two to three years.

At the same time, the AgCenter is working to develop two- and three-line hybrids. Two-line hybrids involve having two dissimilar parents that are crossed to develop the hybrid, which theoretically has hybrid vigor and outperforms both parents.

With the three-line technique, a third line is brought in and provides more stability in terms of agronomic traits.

Jim Oard developed LAH169, which the AgCenter released this year. LSU is still looking for a partner to blow up the seed and bring the hybrid to market. At the earliest, it will be two to three years before the new hybrid is available to growers, Oard says.

A potential candidate for release is CLH161, a Clearfield hybrid with traits similar to LAH169. The difference is CLH161 has tolerance to Newpath herbicide. 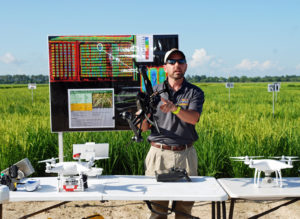 LSu AgCenter Extension rice agronomist Dustin Harrell shows off some of the drone technology he has used to determine crop fertility.

Other research highlighted at the field day included:

• Rice Extension agronomist Dustin Harrell discussed his work with drones using cameras with special lenses to determine rice fertility. Unlike the GreenSeeker, which just tells growers whether they have enough mid-season nitrogen or they need to apply more, Harrell says his work would let growers know how much, if any, they needed to apply midseason.

The latest addition to the market is Amistar Top from Syngenta. It is a premix of azoxystrobin, a group 11, and difenoconazole, a group 3.

1. Use full labeled rates
2. Rotate modes of action
3. Use the correct timing to optimize control
4. Don’t apply a fungicide if you don’t need to