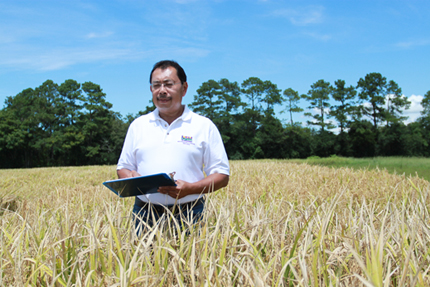 More than 750 million people don’t get enough nutrients from their food, and more than two-thirds of those live in places that consume a lot of rice. Can rice bred for extra protein be the answer?

“There are hundreds of millions of people around the world who depend on rice and eat it three times a day, but their access to protein is very limited by availability and cost,” says Herry Utomo, a professor at the Louisiana State University AgCenter. “High-protein rice can be used to help solve the worldwide problem across social, cultural, and economic issues.”

Utomo and his team developed a high-protein rice cultivar, ‘Frontière,’ which was released in 2017. The rice was developed through a traditional breeding process.

It’s the first long-grain high-protein rice developed for use anywhere in the world, he says. On average, it has a protein content of 10.6 percent, a 53 percent increase from its original protein content. It also needs less heat, time and usually less water to cook.

This high-protein cultivar, grown commercially in Illinois, is currently marketed as “Cahokia” rice.

However, breeding a crop for more nutrients like protein can cause a yield decrease. That’s why the researchers are trying to combat this.

They tested 20 new lines of high-protein rice to see if any would have a higher yield. Their data showed the new high-protein lines improved yield by 11-17 percent compared to the yield of the first high-protein line. Grain quality characteristics differed.

Utomo says this new advanced line, with higher yield, is ready for final field testing prior to release.

He says researchers developed high-protein rice because of the growing market for new products that can offer more nutritional value from major food crops, including rice. In addition to being eaten plain, the high-protein rice can be processed into specialty food for higher nutrition.

Many products—from rice flour used in baked goods to rice milk, baby foods, cereals and crackers—contain rice and could benefit from more protein.

“We are now studying exactly how flours from this rice bake differently than other rice flour,” Utomo says. “The interest in gluten-free baked products continues to grow. This will present another opportunity for rice growers to give people what they are looking for.”

The next steps go in two directions, Utomo says.

“Because the original line is new to the market, marketing channels have to be put in place,” he says. “In parallel, research for the next generation of high-protein rice lines is being carried out.”

Researchers hope these newer lines can ultimately be bought and grown by more farmers.

“Farmers don’t have to change much to grow the high-protein line now on the market,” Utomo says. “The higher protein is an incredible added value they can get without any additional cost or changed practices.”

Utomo presented this research at the recent annual meeting of the American Society of Agronomy and Crop Science Society of America in Baltimore, Maryland. The U.S. Department of Agriculture National Institute of Food and Agriculture  and Louisiana Rice Research Board funded this project.

The Agronomy Society of America contributed this article.