Figure 1: Initial symptoms of blast may be confusing. Flag the area if uncertain and visit again after a few days for typical symptoms — photos courtesy University of Arkansas

There is already dew in the mornings and rain is in the forecast. Even with planting being later this year, it may still be time to start scouting for leaf blast in susceptible rice, particularly in the event of frequent rains, overcast days and slow wind.

Remember leaf blast can start at any stage of rice development. Based on reports and observations in Arkansas, leaf blast often starts somewhere between the second and the third week of June in susceptible varieties and continues from there. To read on susceptibility levels of varieties go to Commercial Rice Cultivar-Responses.

• Fields with heavy tree lines, especially on the east side – dew period is often prolonged from dew or rain droplets.

• Fields with soil types where a deep flood cannot be maintained (sandier soils).

• Fields with a history of blast planted with susceptible varieties.

• Fields in river bottoms where fog and dew are often prolonged.

• Low cut fields that are low in fertility, particularly potash.

• Fields with low irrigation capacity and stressed from water shortage.

Reasons why blast is of great concern: 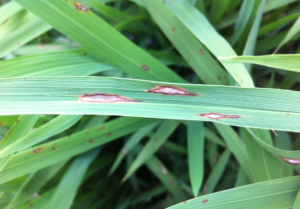 • The disease is unpredictable and spores produced by the fungus are wind-borne which can be blown into any field from long distance or nearby fields.

• Spores can further be blown across the same fields from the smallest spot where the disease started.

• The pathogen is versatile and adapted to wide spectrum of weather conditions.

• In severe situations in susceptible varieties, it can kill seedlings or cause near 100% grain yield loss later in the season unless suppressed in one way or several ways.

Why you should scout for leaf blast: 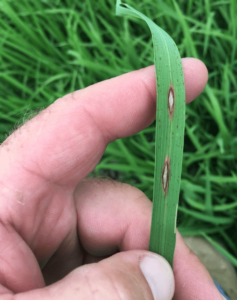 When blast symptoms are caught in a field as early as possible, management is much cheaper than using chemicals–simply raise flood depth to at least 4 inches. In doing that, you will suppress the disease by reducing the number of spores that are further produced and hence, reduce new infections.

Also when you raise the flood depth, you decrease stress to the crop and increase its tolerance. Again fungicides may not be needed to manage leaf blast early in the season unless there happens severe leaf burndown.

When you do timely scouting, you will know the field history and susceptibility level of your variety under your management.
Scouting for leaf blast helps you in your fungicide application decision.

Where in the field to scout:

Symptoms to look for:

Initial symptoms of leaf blast may not be clear and can be confused with herbicide damages or brown spots (Figure 1). If symptoms are confusing, flag the spot and visit the field again in five to seven days. Typical symptoms are as shown in Figures 2 and 3.

Dr. Yeshi Wamishe is a University of Arkansas Extension rice pathologist. She may be reached at ywamishe@uaex.edu.