Farmers apply nitrogen to their rice crops to promote optimal plant growth and achieve maximum yields. For nitrogen to meet these goals, it has to be available to the plant. 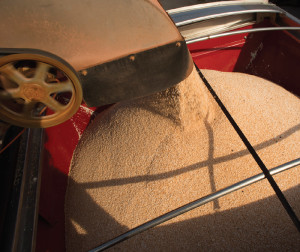 Urea treated with Limus nitrogen management is loaded for delivery to the field. An orange dye turns the white urea orange for visual confirmation of good coverage.

Dr. Nathan Slaton, professor and Director of Soil Testing at the University of Arkansas Division of Agriculture, says, “For urea, we have very strict protocol that we need to follow to get maximum uptake of nitrogen (N) by the plant and minimize N loss. The large proportion of N that is going out pre-flood should be applied onto a dry, crusted soil surface. Once the fertilizer is applied, it must be covered as rapidly as possible with flood water to move it into the soil, which limits the time available for ammonia volatilization and prevents nitrification of the ammonium that forms after urea is applied into nitrate.”

Slaton notes that ammonia volatilization is the first N loss mechanism that farmers have to deal with when urea is applied to a moist soil surface. The moisture that is present helps the urea granule to dissolve, then the enzyme called urease converts the dissolved urea into ammonium.

“When that happens,” he says, “a number of transformations and reactions occur in the area where the granule landed. For example, the pH increases dramatically, especially on silt and sandy loam soils. When the pH is high, it favors the existence of ammonia gas. In rice, when urea is laying on top of the soil when it is first applied, there is nothing obstructing that gas from moving off the field and into the atmosphere. That’s volatilization, which results in nitrogen loss.”

Blocks Urease Enzyme
To help rice producers reduce ammonia volatilization, BASF has developed a tool called Limus nitrogen management to use on urea and UAN. Limus nitrogen management is a liquid formulation that retailers pour in with the urea as they mix it to coat the outside of the granules. The rate is three quarts per ton of urea. For UAN fertilizer, the rate is a quart and a half per ton.

“Limus blocks the urease enzyme from causing the conversion of dissolved urea into ammonium until the producer has enough rainfall or can run irrigation to move the nitrogen into the soil,” says Nick Fassler, product manager, BASF. “It’s critical for rice growers because they often will apply nitrogen, and then there is a period of time between the N application and when they apply the flood. Limus protects the nitrogen from volatilization during that point. Once the field is flooded, the nitrogen moves into the soil.”

Slaton notes that urease inhibitors are only beneficial if you have an environment that is conducive for ammonia volatilization.

“On a field study where we put the Limus nitrogen management in a situation knowing that we would have a good environment for ammonia volatilization, we saw that the product worked very well,” he says. “Even though the urea granule disappears, this product keeps it in the urea form for a number of days by inhibiting the urease enzyme.”