Once the top rice-exporting country globally in 1980, the United States has since slipped to a distant sixth place where it only has a 7 percent share of world rice trade.

“The rest of the world has increased by almost four-fold since 1980,” says Carl Brothers, senior vice president and chief operations officer of Stuttgart, Arkansas-based Riceland Foods. “This is not healthy for us. Something has to happen because we’re not participating in world trade like we used to.”

That places more importance on domestic markets, where use has increased 92 percent during the same time.

What’s disconcerting to Brothers is the growth of U.S. rice imports, which amounts to about 20 percent of the domestic market or the equivalent of 400,000 acres of production. Most of that is in jasmine-type varieties.

The United States has higher production costs than many other countries, putting its exports at a disadvantage. U.S. rice routinely is $150-$200 per ton higher on a milled basis, he says. Currently, this country exports between 3 million and 3.5 million metric tons annually, depending on the year. A metric ton is 2,200 pounds.

For the United States to gain back some of its customers, Asian rice price would have to increase substantially more than they have in the past several months, Brothers says.

He presented an overview of markets and the upcoming rice season during an ag update seminar at the recent Mid-South Farm and Gin Show in Memphis, Tennessee.

Bulls on the horizon? 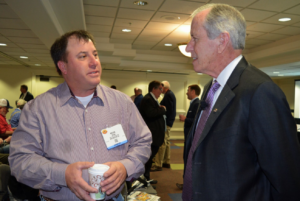 Eric Unkel (left), president of the Louisiana Rice Council and a Kinder rice producer, chats with Carl Brothers, chief executive officer of Riceland Foods, before the start of an ag update seminar at the recent Mid-South Farm and Gin Show — photo by Vicky Boyd

Heading into the 2018 season, Brothers says tight world supplies paint a potential for continued upward price increases. The U.S. Department of Agriculture in its Feb. 8 report forecast ending world stocks of 140.8 million metric tons. Of that, 94 million is in storage in China and likely poor quality.

“I think we’re on the bubble,” he says. “If we had an interruption any place in the world, I think we would see prices go higher.”

“We’re in a very tight market, and the market’s trying to decide what to do,” Brothers says.

Iraq has put out a tender to buy U.S. rice. Whether that deal is consummated will depend on price, he says.

Trade agreements and food aid, long supporters of rice exports, continue to be debated at the White House, Brothers says.

Instead of sending food, some are pushing to send monetary aid.

One of the bright spots in exports is Haiti, which continues to buy large amounts of U.S. rice.

The country tried importing lower-priced Vietnamese rice, but consumers wouldn’t accept it because it didn’t have the flavor or mouth feel of U.S. rice. Since then, Brother says, Haiti has refused to buy rice from Vietnam.

Although China has agreed to begin importing U.S. rice, challenges with drafting a phytostanitary agreement that governs pests continues to stall the process.

“I don’t feel very good with us being able to legally ship rice to China any time soon,” he says.

Coming off of the 2017 season, where U.S. growers planted 2.46 million acres, Brothers says he expects rice acres to increase in 2018. Citing Jan. 23 figures from Informa Business Intelligence, he says plantings throughout the Rice Belt are forecast to be 2.655 million, up 8 percent from 2017 but nowhere close to the 3.15 million acres planted in 2016.

The actual planted rice acres also will depend on soybean prices.