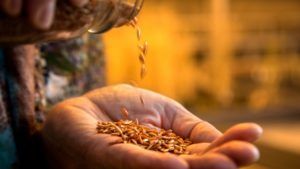 Researchers from Cornell University and the U.S. Department of Agriculture Agricultural Research Service recently released a nutritious red rice cultivar that could appeal to consumers interested in alternative grains.

The new variety, Scarlett, is whole-grain rice that has a nutty, rich flavor, according to a Cornell news release. It is also packed with nutrients: The red bran on the rice has high levels of antioxidants and flavonoids that are common in red-colored grains and fruits, along with naturally produced vitamin E.

McCouch and her team did the back-crossing between the two parents and the genetic analysis, while McClung did the phenotypic evaluation and made the final breeding selection.

Field trials showed that Scarlett rice is high yielding and disease resistant, and also grows extremely well in an organic system. It is being commercially produced and will be available to the public later this year.

This is the first time a cultivated rice variety with a red pericarp, the seed’s bran layer, will be released in the United States.
Most red rice in the United States is considered a “noxious weed” because the genes that lead to red pericarp are linked with such unfavorable “weedy” traits as seed dormancy and shattering (where seeds fall easily from stalks), making it hard to get rid of weedy red rice from the field.

During the breeding of Scarlett, these linkages were broken, so the red pericarp in the new variety is not accompanied by any weedy characteristics.

Scarlett is a cross between an elite U.S. long-grain tropical japonica variety called Jefferson and a strain of Oryza rufipogon, the wild ancestor of Asian rice, collected in Malaysia.

To get rid of the weedy traits, researchers repeatedly back-crossed offspring with Jefferson until they had a variety with long grain, high yield and disease resistance.

Along with genetic testing, they ran field trials in eight locations over the last six years to ensure that no hidden wild traits would show up in different growing environments. Ming-Hsuan Chen, chemist with USDA, determined that the red grain of

Scarlett was unique in that it has high levels of various anti-oxidant compounds that have been associated with health benefits in other foods.

Scarlett is adapted to subtropical climates of the southern United States and similar to growing environments found in Uruguay and Argentina, where it may also be grown.

It is being released as a public variety with no intellectual property restrictions and is royalty free.