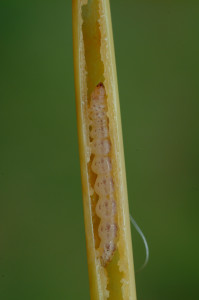 Since the Mexican rice borer was first confirmed in Texas in the 1980s, it has slowly expanded its range throughout
Southeast Texas and into Southwestern Louisiana, infesting rice, sugar cane and a host of grassy weeds.

Although researchers and growers have found an insecticidal seed treatment helps manage the pest in both the first and second, or ratoon, rice crops, they agree that relying on one management tool is never a good idea.

“There’s always a concern when you rely on one single tactic over and over again,” says Julien Beuzelin, an assistant professor of with the Louisiana State University AgCenter.

A collaborative research effort between LSU and Texas A&M seeks to answer some of the unknowns associated with this relatively new pest, including the role plant fertility plays, alternate host plant management, economic thresholds, variety or hybrid tolerance, and possible new chemical controls.

The project, which kicked off in 2014, is being funded by a three-year U.S. Department of Agriculture National Institute of Food and Agriculture grant. Among the researchers involved are Beuzelin; Dr. Mike Stout, L.D. Newsom Professor of Integrated Pest Management with LSU’s AgCenter; and Dr. Mo Way, an entomology professor with Texas AgriLife Research in Beaumont.

Beuzelin also was lead author of an article published in the April Journal of Integrated Pest Management that provided a historical perspective on Mexican rice borer biology and management of the pest to date. As the group of authors from LSU and Texas A&M University researched the article, they noted knowledge gaps and used the information as a basis for the USDA grant proposal.

Mexican rice borer on the march
Mexican rice borer was first identified in the Texas Rio Grande Valley in 1980, and it has spread throughout Southeast Texas. In 2008, it was confi rmed in Calcasieu Parish, La., and has expanded eastward in Louisiana by 10 to 15 miles annually. It is now found in nine Louisiana parishes: Calcasieu, Beauregard, Allen, Cameron, Jefferson Davis, Acadia, Vermilion, St. Landry and Evangeline.

One unknown is how far north this new pest will move. Two related insects — the sugarcane borer and the rice stalk borer — are sporadic pests of Louisiana rice. Sugarcane borer has been found as far north as North Louisiana and South Arkansas.

Beuzelin says he suspects the Mexican rice borer also could survive in South Arkansas, but cold tolerance is an area where he wants to conduct additional studies. 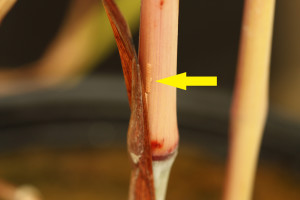 Not only does the product help manage stalk borers, but it also controls rice water weevils and fall armyworms.

“The big issue is we don’t have good thresholds on when to spray — that’s something we’re working on,” he says. Part of the research also will try to quantify yield reductions caused by Mexican rice borer.

Although relying on a single class of chemistry may contribute to resistance, Way says the wide host range (many common grass weeds) of the Mexican rice borer can mitigate the development of insecticide resistance. As a result, only a portion of the overall population is exposed to the insecticide.

“It’s everywhere all of the other host plants are,” he says. “Practically every grass you can find in Texas is a host of Mexican rice borer and they act as refuges for them.”

Among the grass hosts are johnsongrass, barnyardgrass, Amazon sprangletop and vaseygrass, also known as Paspalum.

What has Beuzelin more concerned is the Environmental Protection Agency’s effort to vacate registration for flubendiamide, marketed as Belt. It is in the same class of diamide chemistry as chlorantraniliprole.

“I don’t now how closely related they are as far as degredation in the environment,” Beuzelin says.

The EPA cites possible toxicity to benthic organisms — microorganisms that live in ocean sediments — as reason for its actions.

Flubendiamide’s registrant, Bayer CropScience, says the EPA’s logic is flawed and has requested a hearing before an EPA administrative judge. 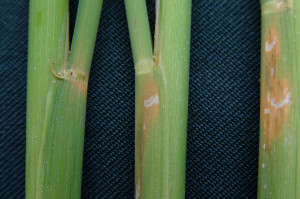 Early instar Mexican rice borer, along with other borer, cause this orangish discolaration at feeding sites — Photo courtesy LSU AgCenter

That’s because the rice was at the most attractive growth stage when female moths were seeking sites on which to lay eggs. Reducing cutting height of the main crop stubble to 8 inches from 16 inches may reduce infestations by 70 to 81 percent, according to a collaborative Texas A&M and LSU study.

But some growers are hesitant to adopt the practice because it slows harvest speed, increases wear and tear on combines, and delays second crop maturity, Beuzelin says.

In addition, current trials are looking at how silicon soil amendments may toughen culms and leaves.