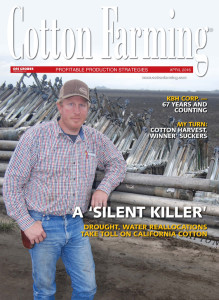 The article, titled “A Silent Killer,” appeared in the April 2016 issue of Cotton Farming.

Criteria for the awards were: awareness of agriculture’s importance in the Central Valley; use of visuals to tell the story, where applicable; thorough and objective coverage of the issues, given time and space limitations; and portraying the “human side” of the industry, making the issues relevant to consumers and/or producers.

The more than 40 entries in five categories were judged by a panel of journalism experts as well as members of the Fresno County Farm Bureau’s board.

The awards were presented during the Farm Bureau’s annual Celebrating Friends of Agriculture social, June 16, at the C.P.D.E.S. Hall, in Fresno.

In receiving the award, Boyd said, “This honor really means a lot because not only is it judged by journalism professionals but also by Farm Bureau members who are producers. And it’s those producers who we’re trying to reach with our magazines.”