Saturated soils in Missouri set the stage for spring flooding 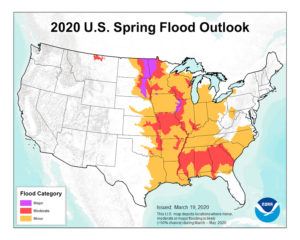 “A lot will depend on the weather patterns that set up over the region in the next few weeks,” he said.

Missouri farmers, still reeling from 2019 weather woes, face a greater than 50% chance of moderate flooding on mainstream rivers and their tributaries again, according to National Oceanic and Atmospheric Administration forecasts for the Midwest and Missouri River basin.

Extremely wet soil conditions this past winter laid the groundwork for another troubled growing season in the agricultural world, Guinan said.

This was the third consecutive wet winter in Missouri. It also ranked as the 19th-wettest winter in National Weather Service’s 125 years of records.

“Unusually wet conditions have prevailed since the beginning of 2019, with 10 of 14 months recording above average precipitation,” said Guinan.

Missouri kicked off 2020 with high soil moisture levels across a large portion of the Mississippi and Missouri river basins.

The degree of flooding depends on spring temps

The degree of flooding potential depends in part on spring temperatures, which affect the speed of ice melting across the upper Midwest. To date, fluctuating temperatures have created an ideal slow melt, Guinan said.

The preliminary annual statewide precipitation average for Missouri in 2019 was 53.81 inches, making it the seventh-wettest year on record, Guinan says.

Weather gauges from Missouri Mesonet, National Weather Service and the Community Collaborative Rain, Hail and Snow volunteer network recorded more than 80 inches of rainfall in 2019 in parts of McDonald and Newton counties, and more than 70 inches in several other southwestern Missouri counties and the Bootheel. The extreme wetness carried over into this year.

“It has been muddy for both row crop and forage producers,” he says.

Flooding in 2019 resulted in higher prevented-planting areas in his area. However, actual flood damage was minimal, he said. The wet autumn slowed harvest and rutted fields when farmers ran harvest equipment under less than ideal conditions.

Wet conditions continued into the new year, delaying timely nitrogen applications to wheat in some areas. However, short dry spells have allowed some wheat to be fertilized, and repair of some fields occurred, said Ohmes.

Brunswick, in western Chariton County, was one of the areas in Missouri hardest hit by flooding in 2019. Debris and high water washed out the Norfolk Southern Railroad bridge, suspending rail service between Moberly and Kansas City. The agribusiness community suffered another blow when floodwaters hit the Brunswick River Terminal, one of state’s largest grain terminals.

Moore said some levees along the Grand River received repairs. Others have not.

MU Extension agricultural engineering specialist Kent Shannon said many farmers are still evaluating fields and prioritizing where they can work with the least amount of effort.

Some farmers may not be able to plant again this year due to sediment and debris left from 2019. Shannon said ground near Huntsdale and Hartsburg appears to be more ready than northern areas of his region such as Glasgow. The work is far from over, he said, and for many it is just getting started.

The Kansas City district of the U.S. Army Corps of Engineers has numerous levee rehabilitation projects in the works, with 20 projects out for bid. Some emergency order repairs have been made.

In many cases, farmers themselves scurry to shore up weakened levees before another growing season begins. Farmer Sam Hackman tweeted photos of himself and other New Franklin-area farmers making levee repairs with their own equipment.

Others, such as seventh-generation farmer Adam Casner of Carrollton, exhibit the same can-do attitude. Casner tweeted on Feb. 29 that he had finished cleaning sediment off the machine shed floor after last year’s flood. On March 3, he blew windrows of soil that had silted into roads and ditches back onto fields.

Missouri farmers reported nearly 1.4 million acres of corn and soybean went unplanted in 2019, according to the U.S. Department of Agriculture. MU Extension agronomist Wayne Flanary hopes 2020 is not a repeat.

He and Extension specialist Jim Crawford work with producers in bottomland and upland in northwestern Missouri, where floodwaters broke many levees. In Holt County alone, more than 60,000 acres of cropland flooded. Nearby Atchison County reported that nearly 56,000 acres—18 percent of the county’s cropland—went unplanted.

Floodwaters remained on some fields more than 250 days and did not recede until mid-December. This limited access for agencies and landowners to assess damage.

The Federal Emergency Management Agency, the Army Corps of Engineers, the state of Missouri, the USDA Natural Resources Conservation Service and local levee districts all work to repair levees.

“We’re trying to dance with different agencies,” Heitman said. “All these agencies have their own requirements and parameters, and we’re trying to coordinate those to build a secure system against the river.”

The Corps of Engineers completed survey work on five breached levees in Heitman’s area and soon will let bids for reclamation work, he said. Some repairs have been made already under Corps emergency order.

“We’re almost at the point where we can move soil, but we’re not there yet,” Heitman said. “A lot of things play into it. It’s not just plugging a hole. We are in uncharted waters.”

The University of Missouri contributed this article.