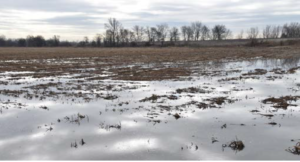 For the second straight winter, many parts of Arkansas have received unseasonably heavy rains. This has slowed field preparation and rice planting — file photo by Vicky Boyd

Finally, some rice is in the ground. Barely.

Jarrod Hardke, Extension rice agronomist for the University of Arkansas System Division of Agriculture, said Thursday that a handful of growers began water-seeding rice, a technique that typically accounts for about 5% of all rice acreage in the state.

“That’s the very first rice planted in Arkansas to my knowledge,” he said. “But beyond that, we’re still staring at a very difficult time to get any other rice in the ground.”

The window for early planted rice has nearly passed, with hardly a break in the wet weather that has plagued the state for most of the past 18 months. Since Jan. 1, much of the state has received about 150% of its typical rainfall for the three-month window, according to data from the National Oceanic and Atmospheric Administration.

The near future forecast doesn’t look much different, with next week’s temperatures dropping back into the 60s, and more rainfall expected.

“It continues to point up,” he said.

The U.S. Department of Agriculture has conducted surveys of growers over the past two weeks, he said — the same period in which the COVID-19 pandemic has seized much of the world’s attention, leading to panic-buying of rice and other staples in the United States. Simultaneously, soybean and corn contract prices have dropped, while rice prices have remained relatively stable.

Market prices weigh heavily on growers’ acreage allocation decisions, and 2020 is likely to be no different.

“In theory, some of that shift in intention will show up in the prospective planting report,” Hardke said. “Given everything else that’s happened, 1.5 million acres, assuming we have the opportunity to plant it, is actually at the low end of my expectations.”

He said so far, the coronavirus pandemic has not affected the mechanics of farming — although the continued delays in planting leave the state with an open question.

“We’re just unable to really do much of anything yet,” Hardke said. “Even preparing for the season, you’re not much going into your local retailers — everything can be done over the phone.

“Everyone seems to have most of their inputs on hand. It doesn’t seem, at this stage, like we’re going to run into major issues. But it is something everyone’s concerned about, should things continue to drag on. The first week when the weather opens up enough for us to do anything, it’s going to be a pretty good barometer of how the pandemic might affect farming. We just don’t have that information yet.”