Arkansas rice researchers take the guesswork out of midseason nitrogen needs with the use of a handheld device.

Trent Roberts, Extension soil fertility specialist with the University of Arkansas System Division of Agriculture, still remembers when he first fully realized the difficulty in midseason nitrogen management for rice.

“It was a hot Delta morning and a farmer and I were looking at a field of Wells that had just reached ½-inch internode elongation,” Roberts says. “I was a young researcher who was still learning the tricks of the rice game and was asked ‘Does that rice need another shot of nitrogen?’”

Roberts was eager to make a good impression so he pulled on his boots and started out across the field.

“I made it halfway through the field thinking the rice looked good. But as I turned around and put the sun at my back, the rice went from looking lush and green to a lighter shade of green—because as a nitrogen expert you NEVER say yellow rice,” he says.

Roberts wasn’t sure what to think as he continued across the field looking back and forth from the dark green rice to the light green rice, debating the age old question­—to fertilize or not to fertilize?

As Roberts returned to the truck, the grower asked the big question, “Well Doc, what’s it gonna be?” Not willing to divulge his internal argument, Roberts responded, “Probably want to put out some midseason just to be safe.”

The producer called at harvest to say a vacuum was more appropriate than a combine to pick up all the downed rice from lodging. The experience led Roberts to believe there had to be a way to take the guesswork out of determining midseason nitrogen needs.

Another complicating factor is that “rice breeders have shortened the season of our modern cultivars—most of which has been taken out of the vegetative stage, leaving little room for error with preflood and midseason nitrogen applications,” he says.

About the same time as Roberts’ midseason prediction disaster, he had started working with the Greenseeker to determine preflood nitrogen applications for rice—with no success.

The Greenseeker handheld device uses normalized difference vegetation index (NDVI) technology to assess the “greenness” of the plant canopy, allowing researchers to compare different areas of the field in nitrogen-driven crops, such as rice. The simplicity of the handheld device is what makes it so favorable, Roberts says. Pull the trigger, get a reading; hold the device too close or too far from the canopy for an accurate reading, and you get an error message. 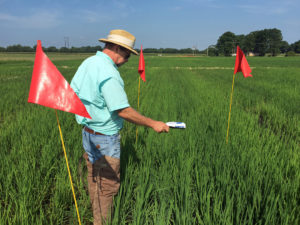 Roberts noticed that the Greenseeker did not work well to predict preflood nitrogen in our direct-seeded, delayed flood rice production systems. The plants were too small with very little canopy coverage and no time for plants to use the soil nitrogen pool.

Roberts received his undergraduate degree from Oklahoma State University where the Greenseeker was developed, so he felt almost obligated to figure out a way to make it work.

“Why does it work on wheat in Oklahoma but not rice in Arkansas?” he wondered.

The primary difference was that Greenseeker readings were almost always taken on wheat that had already been fertilized with preplant nitrogen and the Greenseeker was being used to determine if more nitrogen was necessary in late winter to maximize yields.

For the past few years, Arkansas rice growers have supported Greenseeker research through the Arkansas Rice Research and Promotion Board. Now, the University of Arkansas System Division of Agriculture has developed some guidelines on how to successfully use the Greenseeker handheld to predict midseason nitrogen needs for rice cultivars.

Using the Greenseeker handheld for midseason nitrogen is as easy as:
1. Using an optimum single preflood nitrogen rate determined by N-STaR (Nitrogen Soil Test for Rice),
2. Including a nitrogen-rich “reference strip” in every field, and
3. Taking Greenseeker readings three weeks post-flood and after internode elongation.

“The great thing about using the Greenseeker and a response index is that it is completely objective. You are comparing the NDVI of the nitrogen-rich reference strip to the rest of the field, which received the optimal single preflood nitrogen rate,” Roberts says. 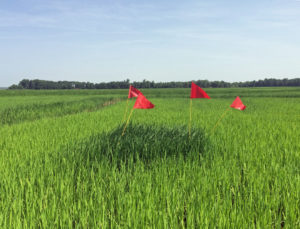 Include a 5-foot-by-5-foot reference strip that has received about 1/3 cup more urea (above the preflood N rate).

Implementing nitrogen-rich reference strips to use the Greenseeker handheld is simple and can be done for both pureline and hybrid cultivars. Although midseason nitrogen applications are not recommended for hybrids, this technology can be used to determine if the preflood nitrogen applications to hybrids were adequately and efficiently managed.

Reference strips should be 5-foot-by-5-foot squares with roughly 1/3 cup of extra urea (above the preflood N rate).

Large bicycle flags work well for marking and remembering the location of the reference strips. It is recommended to have at least one reference strip per 50 acres of rice, and it is preferred to have one in the upper and one in the lower part of the field where water management and nitrogen efficiency may differ.

Greenseeker readings should be taken no earlier than three weeks postflood and after internode elongation to ensure that the rice plant has had ample time to take up and use the preflood nitrogen before making decisions about midseason nitrogen needs.

Inclusion of the reference strip means that there is no need to calibrate the Greenseeker for different cultivars or environments. But without it, you cannot accurately predict the response index.

The Greenseeker handheld is an exciting new device that producers and consultants can purchase to accurately predict the need for midseason nitrogen. More information on the use of the device in rice and how to use the nitrogen-rich reference strips and response index can be found in the 2017 “Rice Farming for Profit” publication at http://bit.ly/2p7Phre.