When your back’s against the wall, you tend to think out of the box. If you find yourself in Arkansas rice farmer Jackie Ray Banks’s circumstances, you may have to think outside of the window, the planting window.

Consider this scenario set on May 29, 2013. From March 3 to May 22, it had rained a total of 15.8 inches, ranging from .3 to 2.5 inches every few days on close to 1,000 acres of heavy, gumbo ground near Clarendon. The rains were not widespread. They occurred in a three- to five-mile radius around Banks’s farm.

Now, it’s May 29 with a 10 percent chance of rain. Pre-plant solution-based fertilizer had already gone out, Banks had 903 acres worth of Clearfield XL729 and Clearfield XL745 hybrid rice (a $150,000 investment) that had been blended with 150 pounds of ammonium sulfate sitting on a truck, the fields were muddy, and he had not sowed a single seed.

“I said I would never plant past May 20 after the 100-year flood in 2010,” Banks recalls. “On May 29, I had a few ‘high’ fields, and the others had water standing on them. I got on a tractor and mudded in three of the fields. We were broadcasting the 97 with airflow trucks, and there was a 10 percent chance of rain. If I was meant to be in eleventh gear, I was in thirteenth, covering rice and dealing with mud holes. But I was going to get something planted. “Things were going pretty decently and the wind was blowing, so I had run all night the night before with a borrowed McFarland 46-foot drag harrow,” he says. “I never got to pull my new Krause field cultivator that I was going to cover the rice with because the field stayed wet. I was going to cover the seed that night. The next morning we planned to keep going through the mud. “My son Jake was in front of me scratching, trying to touch it, seal it and re-roll it again,” he adds. “Then he came over the radio and said, ‘Daddy, there is one red dot around Clarendon.’ I said there’s no chance of rain. Soon the wind commenced to blowing, and a storm blew up right there in a threemile square, and it rained .7 inch. The tractors were rocking, and the rice wasn’t covered. It was pouring. Now look at us with all this expensive seed sitting out here. “I tried to consider our options, but we had been optioning all year. We didn’t have a choice. It was supposed to rain two days later, and I wanted to get at least half the farm planted. Frustrated, I wasn’t able to do what I am capable of doing. Everybody else was putting a flood on. So we get that planted but not covered.”

Banks also was concerned about the 22-pound low seeding rate for hybrid rice. If it rained, it would stick. If it didn’t rain, the seed would dry up and just sit there. “While I was finishing the 97, it was sprinkling, he says. “It looked as good as it could, but it was awful. It did rain the next day, which saved that field, and the rice germinated. Even though it was May 29, the 745 came up as good as any and yielded the best – about 216 bushels green.”

Todd Mulloy, Banks’ consultant, told Banks to forget the levees. “We’ve got to get it planted,” Mulloy says. “But we were just getting started,” Banks explains. “We lacked the 70, 50, 190, 40, 75 and 65 fields. It is wet again; we are in June; and it was muddier than before. By then, I considered June 6 dry, and I was going to do everything I could. We didn’t have a choice. We had to plant it. Todd told me that we needed 125 days to make a crop. So the clock was tickiing. My best rice fields were the wettest, and we had to levee them. So on June 6, I mudded in 120 acres in two days. At that point, to me 120 acres was good, so I started pulling levees in the other fields. On June 8, I planted 305 more acres. Then I ran out of seed because I had given up 200 acres of 745 that I thought I wouldn’t be able to get planted. Then I found some 729. It turned out to be my worst rice, but it was better than no rice and better than any other kind of rice. “In the end, I planted about 205 acres to beans because it was wet and more rain was forecast. So we shut the rice planting down on June 9. And, to top it off, everything that was planted was sold.”

The Rest Of The Story 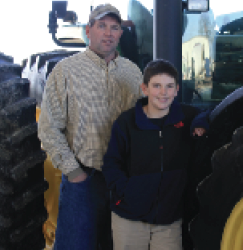 Banks admits that 2013 was scary, but, in the end, his June-planted rice cut about 172 bushels dry, and the milling quality was good enough to earn a small premium. He says the fertilizer program that Mulloy recommended combined with the September heat, his confidence in the hybrids’ potential to withstand the late planting and the work ethic instilled in him by his father were all contributing factors to avoiding a disaster.

“You don’t tell Jackie Banks that he can’t do something,” Mulloy says. “I am the same way. I have to stay positive. That’s why I like doing what I do. It’s all about the farmer. If he doesn’t succeed, I don’t succeed. There is nothing more rewarding than what took place on that farm in 2013 than knowing I can do better. He’s not going to let me down, and I’m not going to let him down.” Banks’s goal for 2014 is 200+ bushels. He plans to increase the seeding rate to 26-28 pounds since he plants rice behind rice. “I wouldn’t wish a year like 2013 on anyone, but if a rice farmer finds himself in a somewhat similar situation,” Banks says, “I hope that the details of my experience may provide some help and give him hope.”