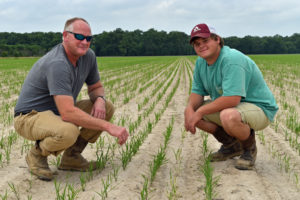 Monty Bohanan (left) and his stepson, Landon Frizzell, check out a field of row rice near Stuttgart, Arkansas.

“Row rice is an emerging production practice for rice that is increasing adoption, but lacks a consensus on production practices,” says Chris Henry, associate professor and extension water management engineer with the University of Arkansas System Division of Agriculture.

The Division of Agriculture has partnered with RiceTec to hold the Row Rice Roundtables, a series of panel-based meetings for farmers to share their experiences with row rice. The meetings are scheduled for Monday, Feb. 25 in Stuttgart, and Tuesday, Feb. 26 in Jonesboro.

The goal of each meeting is to share knowledge on row rice production practices, Henry says. Audience members are encouraged to share information about what practices are being applied, such as irrigation, fertility, weed management and tillage. The panels will include a mixture of Division of Agriculture experts and industry consultants.

In the mid-south irrigation survey in 2015, Arkansas rice farmers reported as many acres of furrow -irrigated rice as zero-grade rice.

“Farmers are interested in furrow irrigated rice because of the potential to reduce tillage passes, plant earlier and explore the use of no-till and cover crops,” Henry says. In a recent three-year study, funded by the Arkansas Rice Research and Promotion Board, Henry found that row rice used significantly less water than flooded rice using collapsible poly tubing or multiple inlet rice irrigation, and the yields were not significantly different.

“That really surprised us, because we expected higher water use numbers and less yield,” he says.

“By sharing experiences, we hope to gather information that can be used to improve recommendations and direct research efforts and it’s an opportunity to learn from other farmers and consultants from across the region,” Henry says.

Farmers and consultants with interest in learning more about furrow irrigated rice are encouraged to attend. The roundtable workshops will be from 8 a.m. to noon on Feb. 25 at the Rice Research and Extension Center, 2900 Highway 130 E, Stuttgart, and Feb. 26 at the Food Bank of Northeast Arkansas, 3414 One Place, Jonesboro.

The Row Rice Roundtables are sponsored by RiceTec. Attendance is free, and lunch will be provided. To register, contact Kim Jackson at 870-673-2661.