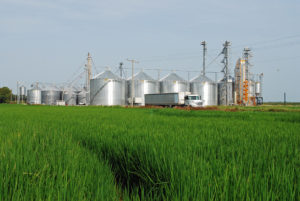 Trucks were moving grain out of bins earlier this summer to make way for the new crop.

The amount of rough rice stored on and off the farm increased by 16 percent in December 2018 compared to the same month in 2017, according to the recently released U.S. Department of Agriculture rice stocks report.

At the same time, the amount of milled rice in storage decreased 41 percent as of December 2018 compared to December 2017.

The total amount of milled rice was 3.96 million cwt. Of that, 3.1 million cwt were whole kernels and 858,000 cwt were second heads, screenings and brewers rice.