Four, including a rice leader, named to Louisiana Ag Hall of Distinction 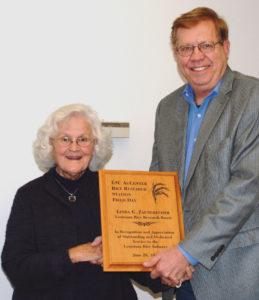 Louisiana Rice Research Board Chairman Jackie Loewer of Branch presents a plaque of appreciation in 2012 to Linda Zaunbrecher of Gueydan for her six years of service on the board — photo by Bruce Schultz, LSU AgCenter

Four Louisiana agricultural leaders, including a rice pioneer, will be inducted into the Agriculture Hall of Distinction during ceremonies in March.

A native of Gueydan, Zaunbrecher is only the second woman to enter the Ag Hall of Distinction. Her career is distinguished by her pioneering work in increasing leadership opportunities for women in agriculture. In 1984, she was the first woman elected to the Louisiana Farm Bureau State Board of Directors’ executive committee. She also helped create the Louisiana Farm Bureau Foundation, a scholarship program named in her honor.

In addition, Zaunbrecher was active in the rice industry, having served leadership roles in both Louisiana state rice groups as well as in the USA Rice Federation. She also was part of a delegation that traveled to Cuba in 2004 to try to open that market to U.S. rice.

A long-time farmer in Lake Providence, Hamilton is a Korean War veteran who passed away in 2001. He’s being honored posthumously for crucial innovations in cotton production and ginning. He was a driving force in the formation of the Louisiana Agricultural Corporation Self-Insurance Fund, which offers workers’ compensation coverage to employers across the state.

Coburn, of Cheneyville, is one of the state’s earliest crop consultants and contract researchers. Over the past 40 years, he’s had an integral role in increasing producer profitability. Coburn is a founding member of the National Alliance of Independent Crop Consultants and the Louisiana Agricultural Consultants Association, where he also served as president. He has developed a national reputation, and his advice is sought frequently when agriculture-related issues arise in Washington, D.C.

A native of Morganza, LaCour is respected worldwide for his expertise with sustainability and conservation in the cotton industry. In his work for the Cotton Research and Promotion Program, LaCour has traveled as far as China and Vietnam to share his knowledge with cotton production, and he has been a presenter multiple times for international meetings in Brazil.

He is a former president of the Southern Cotton Ginners and Louisiana Cotton Producers Association, as well as immediate past chairman of The Cotton Board.

The annual Ag Hall of Distinction induction ceremony is presented by Louisiana Radio Network in cooperation with the Louisiana State University AgCenter, the Louisiana Department of Agriculture and Forestry, and the Louisiana Farm Bureau Federation. Monsanto serves as title sponsor, and First South Farm Credit is the presenting sponsor.