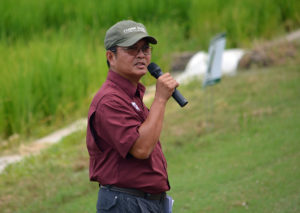 Rice acreage may be down in Mississippi this season, but the amount of ground devoted to rice research at Mississippi State University’s Stoneville research station is as high as Extension agronomist Bobby Golden can remember.

This year, the U.S. Department of Agriculture estimates that the state’s growers planted about 105,000-110,000 acres, down from the 194,000 acres harvested in 2016. But MSU has 132 acres in a wide variety of rice trials led by six scientists along with six graduate students at the Delta Research and Extension Center, Golden says. The bulk of the research is supported by grower check-off funds administered by the Mississippi Rice Promotion Board.

Golden, as well as several other researchers, gave growers some glimpses of their projects at MSU’s recent rice field day at the DREC.

Based on input from growers, rice breeder Ed Redoña continues to look for genetic material that will improve heat tolerance in rice. High temperatures at the wrong time during plant reproduction can reduce yields by up to 10 percent, he says.

Redoña has imported what he calls “new blood” from the International Rice Research Institute in the Philippines and has begun making initial crosses with that genetic material. Altogether, he has about 58 acres of breeding material and varieties in various stages of development.

Yield is the No. 1 selection criteria, followed by other characteristics, such as standability, disease resistance, and milling and cooking quality.

Selections that show promise are put into the five-state uniform regional rice nursery to see how they perform throughout the Mid-South. Redoña also may turn to a facility jointly managed by the five states in Puerto Rico to increase seed during the winter when Mississippi fields are fallow.

But the university’s work is not finished even after a variety is released. Take Thad, for example. MSU released the long-grain, which has high amylose and is suitable for parboiling, in 2016.

Golden and his group are conducting variety-by-nitrogen trials to determine optimum fertilization rates and timing for Thad as well as a number of new hybrids and Clearfield inbreds.

Monsanto recently donated its old Leland research station, including a greenhouse, to the university. Redoña says the equipment that is part of the donation will improve his breeding work by enhancing his work with molecular markers. 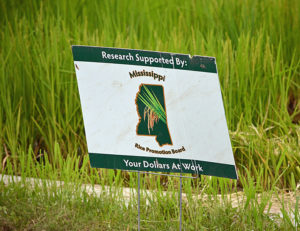 The bulk of the research conducted at the Delta Research and Extension Center is funded by the Mississippi Rice Promotion Board.

Golden along with MSU Extension weed specialist Jason Bond are leading two projects that look at the effects of herbicide drift on rice at various stages of development.

Early in the season, Bond and Golden receive calls from growers about potential drift from burn-down products applied to nearby soybean fields. In the fall, the calls are about desiccants applied to soybean fields that may drift onto nearby rice fields.

The researchers also are looking at different fertilization programs to determine the best regimes to nurse along damaged rice.

Bond also continues to conduct trials with new herbicides and those nearing registration. Among those is Provisia herbicide, which was registered in 2016 for use on Provisia rice.

Provisia herbicide from BASF is a grass material with no residual, so it will have to be as part of a full-season program that includes a residual as well as broadleaf control.

Several herbicides, including propanil, have shown antagonism when tankmixed with Provisia.

“Its quirky what causes us problems,” Bond says of Provisia. “The label will be pretty specific.”

Calling Dow’s Loyant with Rinskor active a “really cool herbicide,” Bond said the product can take out pigweed as well as Roundup did in its early days. Loyant also is good on barnyardgrass but isn’t nearly as strong on sprangletop. Loyant’s weakness is morningglory.

As a broadleaf herbicide, Bond says, Loyant is “death on a soybean,” so growers will have to pay close attention to drift management. It is not registered for use on rice.

March of the fall armyworm 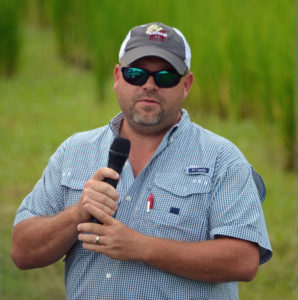 Based on increasing infestations of fall armyworm, Jeff Gore, MSU associate Extension entomologist, is trying to replicate the defoliation the larvae can cause. Fall armyworms are migratory, moving north each year from South Texas and Florida.

For the past three to four years, Gore says the larval pest has been arriving earlier in Mississippi, allowing populations to build up to larger numbers.

Not only does he hope to quantify yield reduction but he also wants to examine the infestation’s effects on milling quality. This work is being done in conjunction with Dr. Gus Lorenz, University of Arkansas Extension entomologist, who is conducting similar trials in his state.

“We’re spraying a lot of rice now, but we don’t know where a lot of our recommendations for spraying fall armyworm on rice came from,” Gore says.