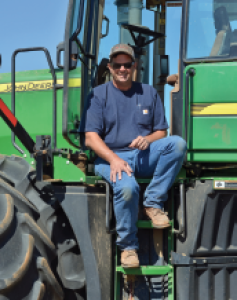 Charley Mathews Jr., a rice producer from Marysville, California, was elected chairman of USA Rice, replacing Brian King who will complete his term at the end of July. Mathews will assume his new role on Aug. 1.

“He is well versed in U.S. rice industry issues going from the field to the board room having served in leadership positions as chairman of both The Rice Foundation and the USA Rice Council,” King says.

Mathews, a third-generation rice farmer, is a graduate of the Rice Leadership Development Program, as is King. He also is past chairman of the California Rice Commission and has served on numerous USA Rice committees, including Sustainability, International Promotion and the Crop Insurance Task Force.

Mathews admits he has big shoes to fill.

“Brian King guided us through some challenging times and presided over countless meetings, including some with Secretary of Agriculture Sonny Perdue, and senators and House members from all over the country, representing the U.S. rice industry,” he says. “He has made trips to major, and potential major, markets including Colombia, Mexico and China, and we appreciate the time sacrifice he has made on behalf of U.S. rice.”

The Rice Foundation is a 501(c)(3) non-profit organization that helps support rice industry research and education.