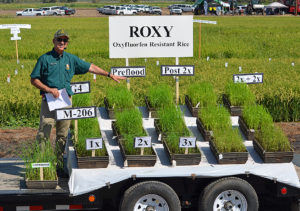 Three years into development, Rice Experiment Station director Dr. Kent McKenzie, who’s leading the project, says he’s pleased with the success so far. But he says several challenges remain, such as finding a registrant who wants to partner with the RES to bring an herbicide to market and registering oxyfluorfen for rice.

“Developing the variety is not the problem,” McKenzie says, adding he wouldn’t venture to guess when the first ROXY rice would become commercially available to growers.

Currently, oxyfluorfen — marketed under several brand names including GoalTender and Goal 2XL— is not registered for use in rice in the United States. But it is labeled for weed control on a broad array of crops, including soybeans, corn, cotton, tree fruit, grapes and nuts. A PPO inhibitor, the herbicide controls a wide variety of grasses and broadleaf weeds.

To date, no rice weeds have confirmed resistance to PPOs, McKenzie says.

The rice herbicide Shark, or carfentrazone-ethyl, also is a PPO. There is “some indication” that smallflower umbrella sedge may be growing more tolerant to the product, says Dr. Kassim Al-Khatib, a University of California, Davis, weed science professor.

McKenzie envisions growers being able to apply the material to ground that’s already been prepared for planting, possibly just behind a roller. Then growers would flood fields and have seed flown into the water, just like they do today.

When asked about expected water hold times, McKenzie says he didn’t know since the research is still in the early stages.

ROXY rice, which stands for “resistant to oxyfluorfen,” was developed using traditional induced mutagenesis. This technique has been widely used in breeding numerous crops, including the first California semi-dwarf, Calrose 76, as well as M-401, Clearfield and Provisia lines. Varieties developed using this technique are not considered genetically modified organisms or GMOs.

The ROXY project began in 2014 when breeders generated mutations and screened 20 to 30 acres for the resistance trait by spraying plants with oxyfluorfen.

“Yes, this was really spray and pray, and we prayed a lot,” McKenzie says.

By that summer, they’d identified 29 plants that showed resistance to Goal 2XL. Those were eventually winnowed down to nine with oxyfluorfen resistance.

McKenzie describes the herbicide-resistance trait as recessive. That means if ROXY rice outcrossed with red rice, the resistance would not be transferred to the progeny in theory, he says.

During 2015, the breeders began purifying the line and transferring the trait to another variety. They chose M-206 because of its natural tolerance to oxyfluorfen.

In addition, the researchers looked at different oxyfluorfen rates and application timings to see how the rice would respond and to confirm resistance.

Also in 2015, they conducted their first collaborative field test with Jim Cook, director of research and technology at Colusa Farm Supply.

Much like the development of other California varieties, the ROXY group relied on the Hawaii nursery to increase seed during the winter.

During 2016, the researchers conducted tests akin to genetic fingerprinting to determine where the mutation occurred within the rice DNA. At the same time, they filed a provisional patent on the herbicide-resistance trait.

Through different crosses and backcrosses, the breeders now have a line referred to as Y3000. This winter, Y3000 will be sent to the Hawaii nursery for seed increase, so researchers will have more material in 2018 to include in the statewide rice nursery program.

The three-year ROXY special project was underwritten by the grower-funded California Rice Research Board.