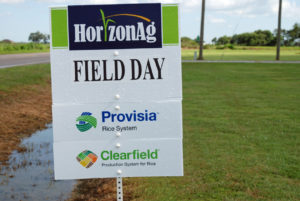 Coming off the successful commercial launch of the first Provisia rice variety — PVL01 — this season, partners Horizon Ag, BASF and the Louisiana State University AgCenter are already mulling their next release.

Depending how it performs this season, PVL108 could be released for seed production as soon as 2019, says Adam Famoso, LSU AgCenter rice breeder.

At the same time, efforts to breed improved Clearfield varieties continue at LSU as well as at the University of Arkansas and Mississippi State University.

Horizon Ag, which markets Provisia and Clearfield varieties, showed off recent releases along with experimental lines at a recent field day near Kaplan, Louisiana.

“We have quite a bit in the pipeline coming along, and we want to answer some of the needs of the exports markets as well as the domestic markets,” says Michael Fruge, Horizon Ag’s district field representative for Louisiana and Texas.

During 2018, growers in South Louisiana planted about 20,000 acres of PVL01, which is “a really good launch for a new technology,” he says.

As with any new system, Fruge says, growers and consultants are learning the optimum seeding rates, application timings and tankmix partners for the Provisia Herbicide that is paired with the variety.

Nevertheless, the Provisia System has performed well this season, resulting in clean fields both in his territory as well as in Arkansas, says Sunny Bottoms, Horizon Ag senior technical services representative.

“The herbicide has done tremendously well as far as cleaning up the weedy rice problems we have in the fields,” Fruge says. “This technology this year was put on a lot of fields that farmers weren’t able to put in (conventional) rice any more. It worked not only on weedy rice but grasses as well.”

Bottoms says she’s received calls from growers in Arkansas telling her of the good grass control they achieved in a year when managing grasses has been a challenge for many.

Fruge says growers in his area have used a range of labeled rates for Provisia Herbicide, but they all put out two applications

Rotation to soybeans and other stewardship practices will be crucial to maintaining the viability of this technology, Fruge says.

“We learned from Clearfield,” he says. “It would be really, really nice to have two technologies that work together, and hopefully Provisia will help us keep Clearfield going and bring back Clearfield in some of the fields where we’ve lost it.”

In the works is PVL108, an experimental Provisia line from LSU that has shown a consistent 10 percent yield advantage over PVL01 in statewide Louisiana yield trials the past three years, Famoso says.

It has had the same low chalk but has shown better milling than PVL01 during that same period.

At 7 millimeters, PVL01 has one of the longest kernels of any commercial U.S. long-grain variety. PVL108’s grain length is shorter, but Famoso says it still meets long-grain criteria and has long-grain cooking qualities.

PVL108 is about six to seven days earlier than PVL01 but a couple days later than CL111, a popular variety in South Louisiana.

Like the earlier Provisia release, PVL108 does not have a strong disease package.

During the 2017-18 winter, LSU did a small seed increase in Puerto Rico. Currently, the AgCenter has a 5-acre field of foundation seed near Crowley, Famoso says. Should the experimental line continue to perform as it has, it could be released to Horizon Ag for seed production as soon as the 2019 season. Growers could then expect to plant it in commercial fields in 2020.

Famoso says he has a lot of material in the Provisia pipeline at various stages of development.

“I’d like to make progress on diseases, especially blast,” he says. “I have four lines that have good blast resistance that are much more similar to South Louisiana long-grain germplasm.”

New Clearfield varieties in the works

CLX1111 has the pitA gene, which imparts natural resistance to blast. Early in its development, the experimental caught Bottom’s attention as far as milling advantage.

“It was faring very well in the experimental trials, but I wanted to see how it would do, as a University of Arkansas line, in South Louisiana,” she says.

Bottoms has it in strip trials and producer fields from South Louisiana through Northeast Arkansas as well as in university trials.

Although CLX1133 doesn’t have the pitA gene, the variety nonetheless impressed Bottoms with its vigor. It does have tolerance to bacterial panicle blight.

Untreated seed of the experimental line came up just as strongly as other varieties that were treated.

“In other trials where it was treated, it was blowing out of the ground, so it was very vigorous,” she says.

Bottoms also has looked at CLX4083, an experimental Clearfield long grain from Mississippi State University, for the past couple of years.

The experimental line has grain quality similar to CL151, but it also appears to have some field tolerance to bacterial panicle blight, says Tim Walker, Horizon Ag general manager.

In addition, it has done exceptionally well on Mississippi’s heavier soils, outyielding CL151 under those conditions. Historically, CL151 has performed well on those types of soils.

Horizon Ag has strip trials of these experimental varieties scattered throughout the Mid-South. How they perform this season will play heavily in the post-harvest decision to release the materials, Walker says.