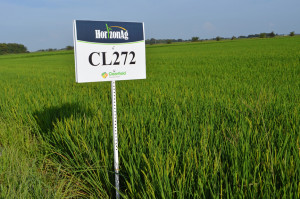 Horizon Ag continues its quest to provide the industry improved grain quality and better agronomics with the introduction of two long-grain and one medium-grain Clearfield variety for the 2017 season.

The releases, which are naturally tolerant to the imazethapyr herbicide, are designed to enhance growers’ bottom lines while providing the grain types that millers and processors want, says Sunny Bottoms, senior technical service representative.

“Part of our goal with these varieties is to keep you economically sustainable,” she told attendees of the company’s recent Arkansas field day at Mark Wimpy Farms outside of Jonesboro. “These have improved yields as well as stable yields and quality. We have to be good stewards of the industry by putting varieties in the market that have acceptance by our markets.”

In addition to the new long grains — CL153 and CL172 — Horizon Ag also introduced a new medium grain — CL272. The company also expects to have increased supplies of CL163, a long-grain introduced on a limited basis in 2016. 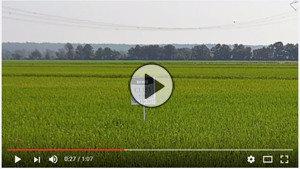 Dr. Sunny Bottoms talks about the two new Clearfield long-grains that should be available for the 2017 season.

CL153 is a variety developed by Louisiana State University that has a yield potential equal to or better than CL 151 but with much less chalk, Bottoms says. It produces a bold grain that is close to 7 millimeters long — a grain characteristic millers have been requesting.

CL153 is blast resistant, has improved standability and overall improved agronomics over CL151.

“I think it’s going to be in high demand this coming year,” she says. Based on calls she’s already received, she says interested growers should put their names in early to ensure they can purchase some seed.

This long-grain Clearfield variety was released on a limited basis in 2016 and will be available for the 2017 season.

Yield potential falls between CL111 and CL151. Where this variety seems to star is on heavy clay soils, Bottoms says. It has high vigor coming out of the ground and doesn’t appear to be as heat sensitive as some other varieties.

Although it is susceptible to blast, she says very few fields had to be treated with a fungicide.

This Clearfield variety, released by Mississippi State University, has excellent milling and a large bold grain. Because of CL163’s high amylose content, it was originally intended for processing, canning, instant rice and parboiling.

But it has gained a following elsewhere, Bottoms says.

“We brought this variety to the food companies, but demand is increasing from mills,” she says.

Amylose, a form of starch, is responsible for stickiness in rice. Low-amylose varieties, such as those used in sushi, are sticky. High-amylose varieties are drier and grains cook up separately.

To gain the most value, growers should IP (identity preserve) it, “which is where you’re going to get the (economic) benefit,” Bottoms says of CL163. “It can be comingled, but the value of this variety is if it’s IP’d.” 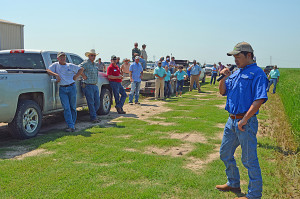 Xueyan Sha, a University of Arkansas rice breeder, discusses a few Clearfield varieties he has in the pipeline.

CL172 is a long-grain Clearfield variety from the University of Arkansas’ rice-breeding program with an extensive pedigree, including Lemont, a long-grain released in the 1980s.

“I see a lot of guys who grew Lemont and really liked Lemont ask about this one,” she says.

CL172 has a yield potential between CL111 and CL151. It is a true semi-dwarf with excellent blast resistance, standability and grain quality.

This newcomer has a large, bold grain with extremely low chalk. It has received interest from Central and South American buyers. Nicaragua has the highest chalk standards in the world, and Bottoms says CL172 can meet those.

But Horizon Ag isn’t stopping with these three new varieties. On display this year were two potential future releases. CLX1111 is a medium-grain experimental, while CLX1024 is a semi-dwarf long-grain experimental from the University of Arkansas.

At least three other experimental Clearfield varieties from Mississippi State University and the University of Arkansas are expected to be showcased next year.