RiceTec continues to push the yield limits of commercial rice with the introduction of the new Clearfield hybrid, RT7311 CL, for the 2017 season. At the same time, the Houston, Texas-based firm is working to improve grain quality, a concern within the rice industry.

“We think today we have our arms wrapped around the formula that will help us move forward,” says Mike Gumina, global CEO of RiceTec AG.

The company also is promoting hybrids as part of overall sustainability since they require significantly less water and fertilizer per unit produced compared to conventional varieties, he says.

RiceTec showed off recent introductions as well as materials in the pipeline at its Aug. 3 field day near Harrisburg, Ark.

RiceTec plans to launch RT7311 CL for the 2017 season. It was formerly trialed as CL XP766 and is a Clearfield version of XP753, says Whitney Jones, district sales manager. 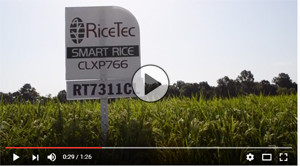 RiceTec also has a medium-grain hybrid in the works, XP368, which yields about 23 percent more than Jupiter, Jones says. It has shorter height than Jupiter and is about 10 days earlier than Jupiter.

Initial trials show it is susceptible to blast but probably not to the extent of Jupiter, Lewis says.

“The only thing we’re waiting on is whether Kellogg’s will accept it,” Jones says.

ACCase-herbicide tolerant hybrids in the works

In addition, breeders at RiceTec are working to develop hybrids with resistance to ACCase herbicides, such as the Assure or Fusilade, says Mason Wallace, tech sales manager. The first releases are expected in 2019 or 2020 and will be based on the genetics behind XP753 and CL XL745.

But ACCase herbicides aren’t as flexible as the Clearfield system’s imazethapyr herbicides, which controlled a host of broeadleaf weeds as well as grasses. ACCase herbicides only control grasses, so growers will have to apply a broadleaf material. Initial trials show antagonism between ACCase herbicides and many other products, so tankmixing may be limited.

The system will involve two applications — one when weeds are in the one- to two-leaf stage followed by a second 10 to 14 days later, depending on rice growing conditions.

At the present, RiceTec has no plans to offer hybrids with stacked Clearfield and ACCase traits.

The third digit signifies herbicide technology. So far, zero is conventional and 1 is Clearfield. The last digit is the number in the series.

RT7311 CL is the first to use the new naming system. Previous introductions, including CL XL745 and XP753, will retain their old names.