Jennifer James elected to Riceland’s Board of Directors 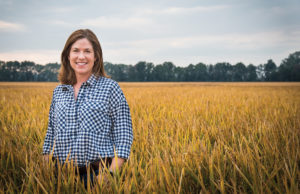 Jennifer Hare James, a Newport, Arkansas, rice grower, was recently elected to the Riceland Foods’ Board of Directors.

When Jennifer Hare James joined the Riceland Foods’ Board of Directors, May 1, representing District 5, she became the first woman to do so in the cooperative’s 98-year history.

James, who farms rice, soybeans and corn with her family near Newport, Arkansas, had served on Riceland’s Northeast District Drier Council board since 2003. “Always kind of in the back of my mind the goal was to be on the board of Riceland Foods,” she said.

Last summer, James attended a women’s leadership conference where one of the speakers told participants to look around the table at the board of directors of the industries in which they work.

“If you don’t see yourself or someone like yourself representing your interests, then it’s your job to fill that seat,” she says, relaying the speaker’s message. “In agriculture, there aren’t that many women on boards of directors, so it gave me a little push.”

At the urging of several area growers last winter, she ran for and was elected to the main Riceland Foods board.

“It gave me the courage to run, and obviously, the farmers in my district were quite supportive,” James said. “I was shocked, surprised and humbled.”

She also credits the Rice Leadership Development Program for providing her the skills and confidence to pursue various leadership positions throughout the years.

“I’ve been volunteering in the rice industry for about 20 years now,” said James, a 1997 leadership program graduate. “It’s my duty to give back what was invested in me during my time in the leadership class. It certainly provided the foundation and gave me access to meetings, committees and networking and helped me build relationships with farmers not only in Arkansas but throughout the country. It has built my confidence and ability to represent farmers in different capacities in the industry.”

In addition, Newport-based M & P Community Bancshares, a holding company for Merchants and Planters Bank and M & P Insurance and Investment Services, recently added James to their bank and holding company’s board of directors.