Putting Provisia to the test 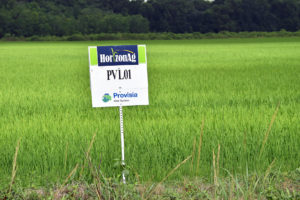 This late-planted Provisia rice field south of Welsh, La., is one of eight farmer-scale demonstrations in the Mid-South.

Kaplan, La., rice producer Christian Richard, who has a 20-acre demonstration field of Provisia rice, looks forward to having the herbicide-tolerant system as another weedy rice management option.

“It needs to be used as a weed management tool, not a yield maximizing tool,” he says.

Representatives from Horizon Ag, as well as the Louisiana State University AgCenter, discussed the Provisia Rice System during a recent grower field day at Richard’s farm.

The system is a collaborative effort among BASF, the LSU AgCenter and Horizon Ag.

Horizon Ag will market Provisia rice seed. The Memphis, Tenn.-based company expects to have about 70,000 hundredweight of PVL01 – the first commercial Provisia rice variety – during a limited launch to growers in 2018, says Horizon Ag General Manager Tim Walker. That amount of seed will plant about 100,000 acres.

He recommends that growers who want to try the system put it on one of their worst fields as far as weedy rice to get accustomed to it.

“My philosophy on any new variety is to try it on 10-15 percent of your acreage first,” Walker says. 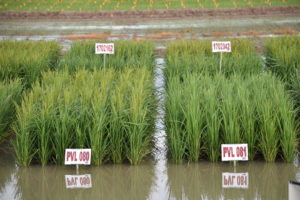 LSU rice breeder Steve Linscombe has led the fast-track effort to commercialize Provisia lines. By using a winter nursery in Puerto Rico four times over four years, he says he was able to bring the first variety to market faster than any previous effort.

“I think it’s going to be a very good addition to our toolbox,” Linscombe says, adding he’s hearing an increasing number of growers complain about a lack of weedy rice control.

“This isn’t going to totally solve the problem – we’re still going to have to be very good stewards of both systems now.”

PVL01 appears to have grain quality similar to the old Cypress variety, an LSU release coveted for its excellent quality, he says.

The Provisia variety also appears to have less chalk than CL172, a Clearfield long-grain variety from the University of Arkansas breeding program, Bottoms says.

“I think it will help address the quality issues we’re dealing with in the U.S. rice markets,” Linscombe says of PVL01.

It is more susceptible to blast than CL153 or Cheniere but less so than CL151.

As a result, he says growers and consultants will have to stay on top of disease scouting.

“We’re doing surfactant work as well as trying to get a sense of what we can put in the tankmix without it causing major issues,” he says.

Currently, Webster recommends avoiding tankmixing Provisia Herbicide with other herbicides, particularly Grasp, Regiment or propanil. Any of the latter three may cause antagonism with Provisia.

When developing a season-long weed-control program, growers and consultants need to be mindful that Provisia Herbicide, which contains the active ingredient quizalofop, is only a contact grass material. Other chemistries will have to be used to provide residual broadleaf weed control.

One program Webster likes is a residual tankmix of Command and Sharpen pre- or very early post.

Herbicide at 15.5 ounces per acre. About 14-21 days later, they make a second application of 15.5 ounces of Provisia to pick up escapes.

Sprayer operators also must be careful to avoid spray overlap when making Provisia applications because of potential rice injury.

“We’re experiencing a little bit of growing pains with this technology,” Webster says. “Just be patient with it and the rice should outgrow (the injury). Especially early in the season, you’re looking at two-three, maybe four-leaf rice and you have a long time for that rice to recover.”

Symptoms include rolling of leaves and fish-hooking on the sides.

Richard followed the Provisia label recommendations and likes what he’s seeing. The 20-acre Provisia demonstration field had a history of increasing weedy rice problems and was chosen because of that.

“That field was just pretty from the beginning,” he says of Provisia’s weedy rice control. “It’s beautiful.”

The same can’t be said for the adjacent field of non-Provisia rice, which is dotted with patches of Clearfield-resistant weedy rice.

Louisiana has about 700 acres of Provisia rice this season, with most of it in seed production fields, Linscombe says.

Both he and Walker agree that they expect to learn more about the nuances of the production system after reviewing his year’s harvest data.