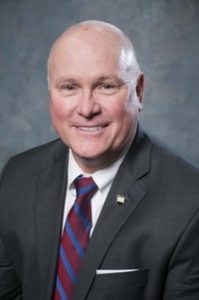 Rich Hillman, a grower of field crops, including rice, near Carlisle was recently elected as Arkansas Farm Bureau’s new president, and Mike Freeze of Little Rock was chosen as the agriculture advocacy organization’s new vice president. Both were selected during Farm Bureau’s 85th Annual Convention at the Statehouse Convention Center in Little Rock. Delegates also elected six other board members during the final day of the event.

He is a sixth-generation farmer whose main crops are rice, soybeans and wheat. Hillman and his wife Tina have two grown children, Collin and Caroline.

“I’m very humbled and excited,” Hillman said surrounded by happy family members. “Arkansas farmers and ranchers are vital to this state, vital. And we have to make sure they’re successful for our state to be successful.”

Mike Freeze, 67, begins his first term as vice president. He operates a fish farm in Keo. He and his wife, Betty, have two grown daughters, Rachael and Kelly.