Although RiceTec doesn’t plan to introduce any new hybrids for 2018, the Houston, Texas-based company does expect to have significantly improved seed availability for next season.

“We’ve been sold out the last two years, so this year we made plans to increase production,” says Van McNeely, director of sales and technical services. “Currently, we’re about one-third harvested. Unfortunately, it started raining in South Texas. Before that, it looked like we would be on target, so we’ll see what happens after this rain. We hope it doesn’t stick around because that’s what hit us last year.”

Among the hybrids that RiceTec targeted for seed increase are 214 CL Gemini, a relatively new Clearfield hybrid with improved grain retention, and RT 7311 CL, a Clearfield version of the popular XL753 hybrid. Both of these exceed Clearfield XL745’s performance in the field.

Unlike inbred or conventional varieties, hybrids require two dissimilar parents, which are then crossed to create hybrid seed for growers. Having the parent lines adds another variable to seed production.

RiceTec’s current parent lines were developed for optimum performance in South Texas, although the company has new parent lines in the works that will grow elsewhere in the Mid-South, McNeely says.

“Fifteen years ago, we did seed production in Missouri, so this would allow us opportunities to get that far north,” he says. “Those parent lines are moving forward, and the hybrids that come out of them look outstanding. It will definitely reduce the risk for us.”

RiceTec also continues to move forward with its FullPage platform, a collaborative effort to develop imidazolinone herbicide-tolerant hybrids with Adama Agricultural Solutions. The FullPage trait was developed through conventional breeding techniques and is not a GMO or genetically modified organism.

The RiceTec-developed trait will be paired with two ALS herbicides: Preface and Postscript from Adama.

Preface will be an imazethapyr with residual weed control. Postscript, which contains the active ingredient imazamox, has foliar activity and is designed more as a clean-up product or to control escapes later in the season.

In trials scattered over several locations, McNeely says the FullPage plots were sprayed with 3X to 4X rates of an imi herbicide without issues. 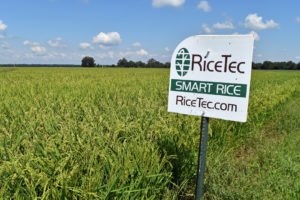 In the past with Clearfield hybrids, he says he’s noticed flashing if the plants were under environmental stress at the time of application. The plants, which were stunted, eventually grew out of the problem and it didn’t appear to affect yields.

“What we’re seeing, at least with the preliminary data with the FullPage technology is it holds up under stresses better than the Clearfield system,” McNeely says.

RiceTec plans to put the FullPage technology in all of its elite germplasm — both current lines and future lines, he says.

“Any time you make that change, you need to make sure you’re not giving up anything else,” McNeely says. “We’re well underway looking at that. So far, it looks very positive, and we’re excited about it.”

Based on current progress, he expects significant volumes of FullPage hybrids for the 2019 season. RiceTec also will continue to offer Clearfield hybrids for at least the next several years.

Developing hybrids tolerant to ACCase herbicides is about a year behind the FullPage platform. The ACCase-tolerant system, which is yet unnamed, will be paired with an herbicide from Adama. This trait, too, was developed by RiceTec using conventional breeding and is not a GMO.

Much like RiceTec is approaching converting elite lines to the FullPage platform, the company also will incorporate the ACCase-tolerant trait into its elite germplasm.

Based on the current schedule, he expects significant volumes of ACCase-tolerant hybrids for the 2020 season.