It’s all about timing

Use plant growth stage and DD50 to gauge when best to make N applications.

Proper nitrogen (N) management is all about timing. Whether we’re talking about preflood N, midseason N or boot N, we need to be on time to maximize yield and the economic return of the application.

For all rice cultivars, whether varieties or hybrids, the same general recommendation applies for preflood N management. We want to apply N and flood up around the five-leaf stage but no later than the “final N date” based on DD50 (heat unit) accumulation. This final date differs for each cultivar because each one reaches growth stages at different times, and this is why use of the DD50 Rice Management Program is so important (https://dd50.uaex.edu).

Nitrogen applications later in the season are also critical but can have a more general window of application. Research on varieties from 2012-2018 helped us paint a solid picture of the optimum timing for midseason N application. 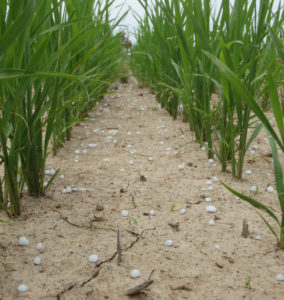 Regardless of the variety or hybrid, apply N and flood up around the five-leaf stage but no later than the “final N date” based on DD50 (heat unit) accumulation — photo courtesy University of Arkansas

The window of application to maximize yield is approximately two weeks long — a much larger window of opportunity than previously thought. So midseason N should be applied four to six weeks after preflood N incorporation but before you reach late boot (flag leaf fully emerged).

Midseason N applications are not recommended on hybrid cultivars unless an N deficiency is noted since the preflood N rates set for hybrids are sufficient to supply the plant until a late boot application can be made.

Instead, it is recommended to apply N to hybrids at late boot to beginning heading — that is, from the time you can see the flag leaf collar to when the first panicles begin to emerge. Applying 30 lb N/acre at this time results in small increases in grain yield and milling yield resulting in a positive net return over the cost of application.

Application made earlier than the late boot application window may still have benefits but also may carry the negative risk of increasing plant height and lodging potential.

Dr. Jarrod Hardke is Extension rice agronomist with the University of Arkansas. He may be reached at jhardke@uaex.edu.

Print & E-mail
DD50 Fertility fertility management university of arkansas 2020-05-15
Vicky
Previous: If you had smut in 2019, plan to protect crops this season
Next: Proof positive