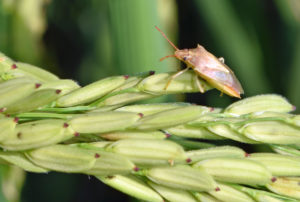 As two southern rice-producing states changed their rice stink bug thresholds, reducing the number that would trigger treatment, University of Arkansas entomologists decided they should revisit their recommendations.

“That’s part of our job as Extension folks — we’re always looking because crop production is always changing,” says Gus Lorenz, University of Arkansas Extension entomologist based in Lonoke. “It means looking at thresholds, and we’ve done that across a lot of crops, particularly cotton and soybeans and some in rice.”

Rice stink bugs feed on rice kernels by inserting straw-like stylets through which they suck plant nutrients. Feeding early in the grain development can cause blanked kernels and direct yield losses. Stink bug feeding during milk to dough stages allows fungal pathogens to enter the kernel, resulting in discolored or malformed kernels known as pecky rice. 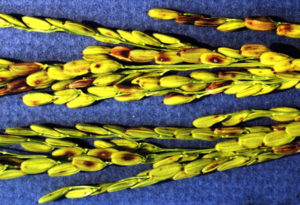 Their old recommendation was five rice stink bugs in 10 sweeps during the first two weeks of panicle emergence, followed by 10 stink bugs per 10 sweeps after that.

“Based on our data, our thresholds were still good, but it started us thinking about it,” he says. “I don’t want growers to take a hit from stink bugs because we’re not spraying quick enough. But on the same note, we have to maintain profitability. If we sprayed on two to three per 10 sweeps, we’d be spraying 100% of our acreage, and that doesn’t help anybody.”

Callers also asked when they could stop spraying for stink bugs. During the past few years, growers and consultants have seen a surge in rice stink bug numbers clear into the hard dough stage, with some continuing insecticide applications.

But hard dough is a physiological process that starts at the tip of the kernel and works back to the base of the panicle. Kernels on the same panicle also will be at different stages, complicating determining the hard dough stage. 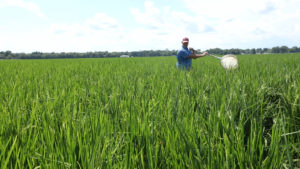 Then they ground truthed the findings with large-block field trials.

As part of his doctoral thesis, graduate student Aaron Cato in 2016 began looking at the thresholds as well as when rice was no longer susceptible to stink bug feeding and treatments could be discontinued.

His research backed up the university’s stink bug thresholds of five stink bugs per 10 sweeps for the first two weeks, followed by 10 stink bugs in 10 sweeps afterward.

“We’re not going to drop our thresholds,” Lorenz says. “If anything, we might raise them a little bit.”

Cato’s research also found treatments were no longer warranted after 60% hard dough. Lorenz says consultants and growers simply need to look at the panicle and count the number of straw-colored grains and the green-colored grains. If 60% or more of the grains are straw colored across 50% of the field, then growers won’t see a benefit from an insecticide application.

Bateman says scouting for rice stink bugs should begin about 75% panicle emergence. Prior to heading, rice stink bugs can be found mostly in non-rice host plants on the edges of fields. It’s not until the plants begin to head that stink bugs begin to move into fields.

“Those rice stink bugs aren’t attracted to the rice until it starts to head,” Bateman says.

Some growers tankmix a pyrethroid with the fungicide they put out for disease control at the boot stage, or about three weeks before heading. Both Lorenz and Bateman say adding the insecticide at that timing is a waste of money because the residual wears off long before the rice begins to head. As a result, the emerging heads will not be protected from rice stink bug feeding.

“Why put it out if it’s not going to protect the rice grain?” Bateman says. “If the heads aren’t out, you aren’t getting protection.”
In fact, putting out a pyrethroid before heading may actually flare rice stink bug populations because it kills beneficial insects, such as long-horned grasshoppers, that feed on stink bug eggs and small nymphs, he says.

The practice also may be contributing to a loss of pyrethroid efficacy in at least a few Northeast Arkansas rice fields. Lorenz and Bateman say they received calls in late September 2019 from a grower who had applied pyrethroids three times and was still not able to obtain good control.

What was concerning was the large number of nymphs that survived treatment, Bateman says. He collected samples and sent them to Neel Joshi, a University of Arkansas assistant professor of entomology at the Fayetteville campus, to have them assayed for resistance.

“What we were seeing was only about 50% to 60% control, and the bioassays showed the same thing,” he says. “It’s definitely alarming now — that area of the state was spraying a lot of stink bugs at the time.”

Growers do have rotational options — including Tenchu 20SG, a neonicotinoid; carbaryl, branded as Sevin; and malathon — but they are more costly, Bateman says.

Endigo ZC, a premix of thiamethoxam and lambda-cyhalothrin, has shown to be effective in trials against rice stink bugs, but it is not labeled for use in rice. Lorenz says the registrant, Syngenta, is working to get the product labeled for rice this season.