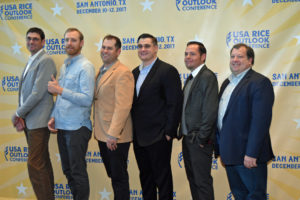 The two-year class, which features four one-week sessions, is designed to provide participants with an overview of the rice industry as well as different production areas. In addition, it is intended to give them the skills they need to take on additional industry leadership positions.

After applications are submitted in the fall, a committee of growers, industry representatives and leadership program graduates, reviews them and whittles them down to eight producers and four industry candidates. Those are then invited to individual panel interviews during the Rice Outlook Conference.

“It was probably the biggest number of applications this year, which makes it extra difficult for us interviewers,” says Charley Matthews, a Northern California rice producer, chairman of The Rice Foundation and leadership graduate.

The program is sponsored by the John Deere Co., RiceTec Inc. and American Commodity Co. through a grant to The Rice Foundation.