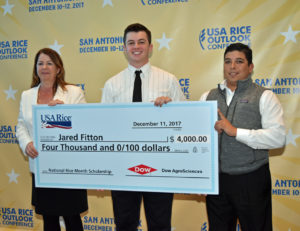 Betsy Ward, CEO of USA Rice, presented a scholarship of $4,000 to this year’s National Rice Month scholarship winner, Jared Fitton, of Santa Barbara, California. The contest is sponsored by Dow AgroSciences, represented here on the right by Zach Lopez.

For years, USA Rice has partnered with Dow AgroSciences to present three scholarships to high school seniors in the six rice-producing states as part of National Rice Month promotions.

Two years ago, the program evolved into having applicants make a short video to highlight some aspect of rice. The videos, posted on YouTube, are voted upon by viewers.

The stars were grains of white rice that flowed into different shapes, such as birds or words, as he narrated the video.

He received a $4,000 scholarship. Although Fitton says he hasn’t decided where he will attend college, he does plan to go into computer science.

“This will be immensely helpful with my college tuition,” Fitton said in receiving the honorary giant check. The award was presented during the recent Rice Outlook Conference in San Antonio, Texas.

Second place and a $3,000 scholarship went to Olivia Davis of Shreveport, Louisiana. The third-place winner, Jessa Goodeaux of Lonsdale, Arkansas, will receive a $2,000 scholarship. View all the entries at http://www.thinkrice.com/scholarship/.