We need fair trade and action

As the official representatives of the U.S. rice industry to the U.S. government, we put politics aside and work with whomever the people send to Washington, D.C.. At the end of the day, we need to get the job done for you.

As everyone in the rice industry knows, trade is critical to the health and profitability of the industry. And as everyone also knows, we face a lot of unfair competition globally and right here at home. So we need a strong trade policy team and agenda to push for greater rice market access and also check the bad actors in the world.

To put it bluntly, I am disappointed at the lack of a clear trade policy agenda as the Biden administration approaches one year in office.

We always give some leeway for a new administration to get their feet under them. But so far, all we have heard from the new trade officials is they are reviewing all trade policies and are putting them through a filter of climate and other non-trade priorities. This has not been helpful as we watch countries take advantage of this power vacuum and lack of initiative by the United States.

Let’s look at India, for example

India is the largest exporter of rice in the world. At 20 million tons this year, it exports more than three times the next largest, and India isn’t doing it on a level playing field. 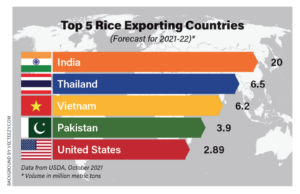 When risk is essentially removed from the equation, Indian producers would be foolish to not grow rice. However, it isn’t fair to the rest of the world. And with the volume India is cranking out, it distorts the global rice market.

We’ve played our part — taking our complaints to the World Trade Organization where the United States called out India for deceivingly calculating and under-reporting its rice and wheat subsidies … by a lot. It’s not even close. The de minimis limit on rice and wheat price supports — that is, the amount India could prop up their producers with the world looking the other way was 10%. In practice, India is somewhere between 74% and 84% for rice.

What’s worse, India admits that it is over-compensating their farmers, but it also claims an exemption to WTO rules for being a developing country. However, the key caveat to using that exemption is that you cannot distort trade, something we all know India can hardly deny.

Our message to the Biden administration is clear: India’s rice subsidies are unacceptable. The country must be held accountable for its WTO commitments and not be allowed to hide behind developing nation status — not when it tips the world trade of rice by depressing prices.

Absent WTO compliance, we support using any and all retaliatory measures we can to help get the administration’s attention and protect the U.S. rice market, which plays by the rules.

This is one of USA Rice’s top trade priorities. Once they are ready to move off the dime, we will be at the front of the line to urge the Biden administration to act quickly and forcefully.

Foundation for the Future at Arkansas Rice Annual Meeting