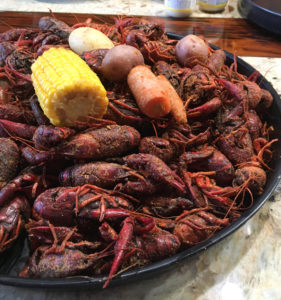 Crawfish boils are made for socializing. As you
peel each crustacean, you’re able to joke or
chat before popping the tasty morsel in your
mouth.

When you think about it, crawfish are nature’s ultimate recyclers. Because of that, the red crustacean complements the rice industry’s already strong sustainability story.

Sustainability is like a three-legged stool comprising economic, environmental and social benefits. If you’re missing even one of those, the stool falls over.

Most of the crawfish grown in South Texas and Louisiana are part of a rice rotation. Growers plant rice one year and harvest the first crop in late summer. Then they flood the fields again for crawfish.

During the winter and spring, the crawfish feed on the leftover rice straw and stubble. By the time producers drain their ponds the following summer, hardly any remnants of the previous year’s rice crop remain. This is the environmental leg.

One South Louisiana producer I talked with recently waits until his rice forms a good canopy and he has put on a permanent flood before planting crawfish in late spring. That way the fields remain a bit cooler and the crustaceans are more inclined to stay around rather than migrate to more hospitable living quarters.

This time of year, the catch begins to quickly tail off as crawfish hit the mud to escape the warming water and hot sun. The producer I met with sorts his catch, selling the big ones and saving the small ones to return to the fields to produce next year’s crop. 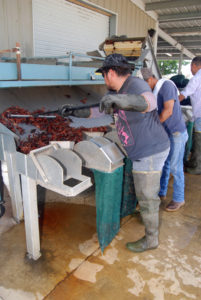 Workers use a machine originally
designed for vegetable packing-
houses to size and grade crawfish.

Crawfish harvest typically begins in earnest in mid- to late winter, depending on the temperatures. This year, cold weather in January kept crawfish activity to a minimum and few producers had much of a catch. As the weather warms, the crawfish become more active and are more attracted to the bait used in the crawfish traps.

Although this year’s season started off slowly, many producers reported demand picked up in late February and March. Overall, they rated this crawfish season as average.

The 40 days of Lent, which starts with Ash Wednesday, also are a big market for the crustaceans as many people who give up meat still eat seafood.

By harvesting and selling crawfish during the rice crop’s off season, many producers have been able to increase or at least stabilize their cash flow.

Restaurants also have benefited by being able to offer fresh, locally caught crawfish during the late winter and spring. Herein lies the economic leg of the sustainability stool.

Let’s not forget the social impacts of providing jobs to workers who harvest and sort crawfish during an otherwise slack time in the ag industry.

And then there’s my favorite reason that still fits with social benefits — I can’t think of anything more fun than getting together with friends over plates of steaming hot seasoned crawfish, baby potatoes and corn to relax and chat.