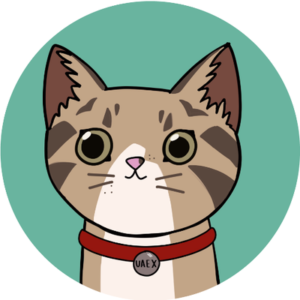 To describe Pedro as a social animal is an understatement. After all, the gray and white tabby has his own Twitter account, posting as @CatUAEX (LonokeUAEXCat) and using the hashtag #catsupervisor. He also has his own avatar – a graphic representation similar to a cartoon caricature – and is trying to prefect the selfie.

Since taking a rather circuitous route to the University of Arkansas Division of Agriculture’s Lonoke Extension Center, where he works and resides, Pedro has become a goodwill ambassador and even somewhat of a celebrity.

“Some grad students came from Fayetteville to check rice fields, and they first had to stop in and meet him,” said Jodi Blackard, entomology and plant pathology administrative coordinator at Lonoke and Pedro’s caretaker. “They just go crazy over him.”

Pedro’s rise to Twitter stardom came when Brian Helms, director of stakeholder relations for the University of Arkansas Cooperative Extension Service, proposed the idea. @CatUAEX could tweet and post photos about what was happening at the Lonoke Station.

From what they can figure out, Pedro took a rather adventurous route to the Lonoke Station. He apparently climbed under the hood of Blackard husband’s truck when he was cutting wood in late February and rode there for about 100 miles as he made deliveries in Lonoke and White counties.

When her husband finally made it home and turned off his truck, he could hear a cat crying. But no amount of coaxing by Blackard could get him to come out, so she finally gave up.

The next morning, she didn’t hear any more sounds and thought maybe the cat had died and gone to heaven. So Blackard drove the 15 miles to the Lonoke Station.

About 30-45 minutes later, coworker Katherine Brown came running in with a starving and very greasy little cat. He had survived two trips in different engine holds with only a broken tail to show for it.

Pedro, as he was named by station personnel, quickly won them over.

“He came right in there and knew whose heart to win over first. I’ve never been a cat person and neither is my boss,” Blackard said, referring to Extension entomologist Gus Lorenz. “When the cat came out of my motor, he ran immediately and jumped into Gus’ lap and nuzzled his neck. And that’s all it took.”

Blackard said she also checked around with residents near where her husband was cutting wood to see if anybody was missing a cat, and nobody even knew whose cat it was.

Pedro was examined by a veterinarian and neutered when he became old enough. He has quickly settled in at the Lonoke Station, where he makes his nightly rounds hunting mice and other prey.

“He’s definitely been worth his while,” Blackard said. “I haven’t had any snakes in my office this year, which is the first time ever.”

The only down side is Pedro leaves souvenirs of his night’s activities for her. They leave the bay doors open a few inches to keep the warehouse-like buildings cooler and to provide him a way to get in and out.

Pedro also meets Lorenz early every morning, wants to be involved in most group meetings and greets station visitors. Blackard and her colleagues say they’re surprised at how social Pedro is.

“He brings a lot of smiles to everybody who gives him hugs,” Blackard said. “He’s a good therapy cat.”

Arkansas rice moves toward harvest, escaping the worst of Ida