The big news this week came on Thursday, July 29,  with the announcement of U.S. rice sales to Iraq. This pushed nearby futures up to $13.85 at one point in Thursday’s trading.

September rice futures followed the other Chicago Board Of Trade grains lower in early trading Friday. However, the contract remains in an up-trending channel that’s been in place since July 12. 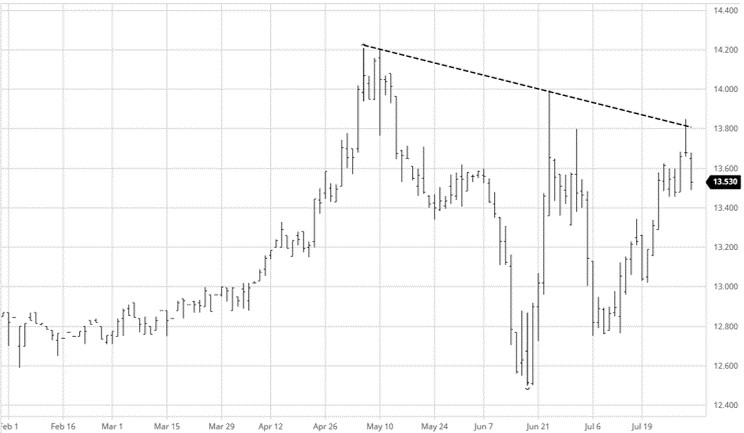 Thursday’s export sales report included activity for the week ending July 22. As the 2020/21 marketing year winds down, sales were low volume which is not unusual. Long-grain rough rice sales were 6,500 tons (all to Mexico) and long-grain milled sales dipped to a marketing year low of 1,429 tons.

There’s one week and two days of export sales left to report in the old crop marketing year. At this point long-grain rough rice sales are up 27% from last year. Sales of 120,150 tons to Brazil have helped.

But the largest year-on-year increase in rough rice business has been to Venezuela with sales up 490%. Sales to Mexico and Nicaragua are both up 21% and 27% respectively from last year levels.

Rough rice sales have been the bright spot in trade as milled sales are 26% behind last year. Total long-grain sales are 5% ahead of last year for the week ending July 22.

The next U.S. Department of Agriculture supply/demand and crop production reports will be released on Aug. 12. The Farm Service Agency also is expected to release its first report of the year on certified crop acres. Following the early June flooding in south Arkansas, questions remain regarding failed acres on a number of crops, including rice. Ideas that some rice acreage was lost may be part of the fuel behind the futures rally seen since July 12. Certainly the anticipation of sales to Iraq was key as well.

“This MOU, which builds upon the initial MOU between the U.S. and Iraqi governments, calls for purchases of 200,000 tons of U.S. rice annually,” said Bobby Hanks, USA Rice Chair. “It took a bit of time for us all to understand this new system in Iraq, but now we are well positioned to provide Iraq with high quality U.S. rice, which Iraqi citizens appreciate.”

Preceding this new MOU, seven senators and 12 house members wrote to the U.S ambassador in Iraq, Matthew Tueller, requesting urgent attention to the recent changes in procurement and highlighting the importance of the Iraqi market to many of their constituents.  Tueller swiftly conveyed these concerns directly with Iraq Prime Minister Kadhimi and Minister of Trade Al-Jabouri.

“We greatly appreciate Ambassador Tueller’s efforts and would also like to especially thank Sen. John Boozman and Reps. Rick Crawford, Bennie Thompson and Clay Higgins for leading efforts to find a workable solution for U.S. rice farmers and the industry,” said Hanks. “I’d also like to thank my own representatives, including Sens. Cassidy and Kennedy, for their efforts here in helping Louisiana farmers.”

Iraq has been a top market for U.S. rice for decades, providing up to 150,000 metric tons in recent years. For the past two years, Iraq has not imported any U.S rice amid drastic revenue shortages, given that crude oil exports account for 90% of Iraq’s revenue and the low prices of oil in 2020.