Solid gains this week in Chicago Board of Trade rice futures following the September WASDE. The November contract closed higher in four straight sessions, gaining 48 cents before hitting chart resistance at $13.80 Thursday, Sept. 15. Cash rice bids at driers were in the $5.84 to $5.90 range after Thursday’s close. Bids at mills were $5.97 per bushel.

Sales of long-grain were unimpressive last week, however there was a milled sale to Haiti of 15,200 metric tons. Rough rice shipments hit a marketing year high of 72,283 mt. Mexico (30,783 mt) and Venezuela (27,500 mt) were the top destinations.

Venezuela has taken delivery of all its purchases year to date. Total long-grain export sales are running 54% ahead of last year for the week ending September 9th.

The U.S. Department of Agriculture’s crop progress had U.S. rice harvest at 40% complete as of Sept. 12 versus the five-year average of 43%. Louisiana and Texas were both at 89% harvested. Mississippi advanced 32 points from the previous week to 50% harvested. Arkansas advanced to 33% harvested.

The after-effects of Hurricane Ida continue to be felt in the urea market. While CF Industries announced that it had begun restarting its ammonia plants at the Donaldsonville Complex in Louisiana, urea production has not restarted.

When the CF facility went down, this removed approximately 5,000 tons of granular urea from the market each day. In turn, this shutdown caused a sharp increase in Gulf urea values.

Prior to Hurricane Ida hitting in late August, urea barges were trading in the low $430s per ton fob New Orleans. In just under two weeks, values advanced to a high of $552 per ton — the highest since May 2012.

For a brief time, this week barge values fell from last week’s highs to trade at $515 per ton. However, bids recovered as the week progressed and September barges were trading at $550 on Thursday. 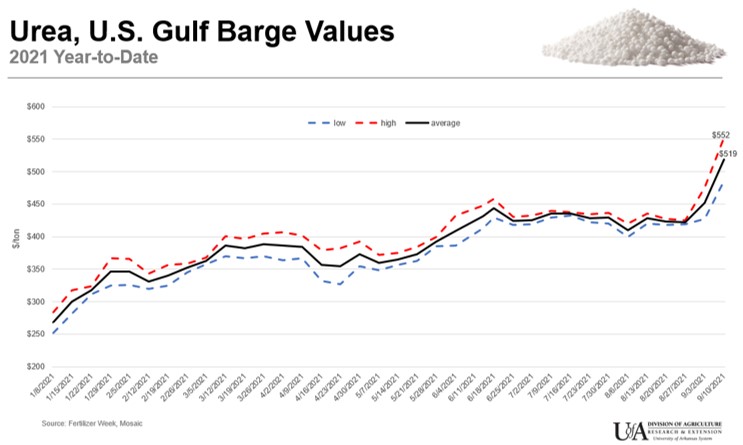 Increases in fuel and fertilizer over the past year will have a dramatic impact on 2022 budgets. We are already seeing that in our 2022 wheat budgets. The sharp rise in all fertilizers contributed to the majority of the $85 per acre increase in variable costs from last year’s budget.

Fuel costs have increased as well with NYMEX diesel futures now trading at $2.20 per gallon compared to $1.16 a year ago. We are in the process of working on 2022 rice, corn, soybean and cotton budgets and should have those available in early October.