The California Department of Water Resources announced an initial 2016 water allocation of 10 percent for customers of the State Water Project. 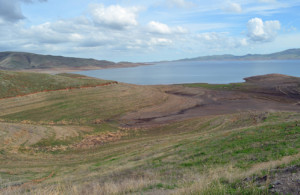 San Luis Reservoir, which stores water for both the State Water Project and the federal Central Valley Project.

The allocation could be increased or decreased, depending on precipitation received this winter. The Department of Water Resources, which operates the project, will make monthly announcements about the supply situation.

During the 2015 season, the state delivered 20 percent of contracted amounts to agricultural contractors.

Despite early season storms this fall, levels of reservoirs that serve the project remain at historic lows.

Lake Oroville, for example, is nearing a record low of 882,000 acre-feet set in September 1977. Oroville supplies water to nearly 1 million acres of irrigated farmland, including rice ground, in Northern California.

An acre-foot, about 326,000 gallons, can meet the annual water needs of one two two families, according to Water Education Foundation.

Because of the drought, Gov. Jerry Brown said the state’s urban water users will be required to continue to reduce water use by an average of 25 percent in 2016. He imposed those restrictions in May.