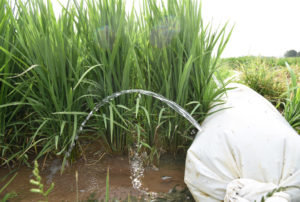 Water from collapsible poly tubing is used to irrigate row rice — a technique for growing rice by keeping the soil moist instead of flooding a field. More farmers are using the-row rice method because it offers more flexibility when they are trying to decide what to plant. No levees are required for row rice — photo by Bruce Schultz/ LSU AgCenter

The event was held at the Elliot Colvin Farm near Rayville, where the LSU AgCenter has one of three research fields in a project funded by the Louisiana Rice Research Board. The other two sites are in Tensas and Morehouse parishes.

Keith Collins, AgCenter agent in Richland Parish, estimated that about 10 percent of the 60,000 acres of rice grown in northeast Louisiana use this practice.

Furrow-irrigated rice, or row rice, involves irrigating a rice field only when the soil becomes dry, instead of maintaining a continuous flood through a growing season.

Moisture sensors in the middle of the research fields can be monitored by computer or smartphone to help determine when a field needs irrigation. The sensors cost about $1,700, but they are not essential for using the growing method, Collins says.

The 23-acre research field was drill seeded May 5 and 6, resulting in nearly a perfect stand.

The method gives farmers the advantage of waiting to see how commodity prices are moving before deciding what to plant. If rice is showing the best return, a row-rice crop can be planted in a field where levees will not have to be prepared, Harrell says.

A furrow-irrigated crop also can use less water than a field with a continuous flood.

Row rice also has its challenges

With no flood covering a field, weed control is more of a challenge. Disease potential is higher, with a high probability for blast disease that thrives in dry conditions, Harrell says. Planting a hybrid is recommended because of its disease resistance.

He is working on fertilizer recommendations for row rice, and spectral imaging cameras are being used to help determine fertilizer amounts and timing.

High night temperatures are stressful for rice plants in the pollination phase, and low temperatures are forecast to be above 80 degrees in northeast Louisiana, which would be excessive for rice, Harrell says.

Rice is reaching a critical stage that requires water. “Keep that field moist during flowering and grain filling,” he says.

Most rice in northeast Louisiana is heading, so scouting should be done for stink bugs.

AgCenter plant pathologist Don Groth says disease has been light this year. Most calls about originate with fields of rice varieties that have higher disease susceptibility.

Scouting is necessary to find sheath blight early. “You want to catch that disease in the lower canopy,” he says.

A new fungicide, Amistar Top, is effective on fungicide-resistant sheath blight, but it doesn’t appear the material is working as well in the field as it did last year in demonstration plots, Groth says. It’s likely that Amistar Top needs to be applied earlier, before the boot or heading stages.

Steve Crawford, retired LSU weed scientist and now a crop consultant, says fields have to be weed-free before planting. Crabgrass and johnsongrass are big problems on fields he monitors.

A row-rice crop is given three fertilizer applications of about 100 pounds each time, or about 40 pounds more than a conventionally flooded crop, he says.

Brown also says this year’s cold winter had an effect on insects that feed on soybeans. He says he received his first red-banded stink bug cast last week, compared to last year when he had numerous calls. Several new products have potential for controlling stink bugs.

AgCenter soybean specialist Todd Spivey says the state has roughly 1.4 million acres in soybeans. Much of the crop is in the critical pod-filling stage, and many areas are in a drought condition.

AgCenter plant pathologist Boyd Padgett says he is telling most soybean farmers that fungicides aren’t needed on their crop because of light disease pressure. Effective spraying for Cercospora leaf blight requires an application of fungicide that places the material under the canopy.