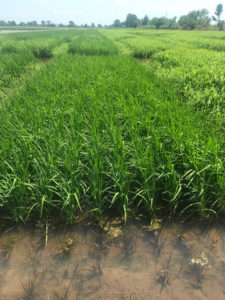 Tom Barber, Extension weed scientist for the University of Arkansas System, says unusual rainfall patterns made this season a rough one for many Arkansas crops.

“This is the grassiest rice crop we’ve seen in a while, but it’s also been a difficult year for many crops,” he says. “We had a lot of rain early, and then by May it shut off and we stayed dry and temperatures increased. We basically got typical June weather in May.”

Barnyardgrass has a reputation for being difficult to manage in rice. This is why Extension specialists recommend overlapping residual herbicides, meaning applying an herbicide at planting, and then another at early post-emergence from spiking to two-leaf rice.

Although this method is a handy go-to, many areas of Arkansas missed the much-needed rainfall during a critical time for herbicide activation. And due to thin profit margins and time constraints, many growers were hesitant to flush.

“Residual herbicides require rainfall for activation,” Barber says. “And since we didn’t get it, we had grass come up with the rice because many growers didn’t flush.”

He says if growers can’t get a handle on barnyardgrass before their rice emerges, management becomes increasingly difficult.

“When the grass comes up with the rice, we usually will spend a lot of time and money trying to control it,” Barber says. “But it was much more difficult to kill this year due to hot and dry conditions.”

Lack of rainfall wasn’t the only obstacle rice producers faced this year. Many products didn’t work as well as hoped.

“So once the fertilizer was applied and fields flooded, the grass shot up and there wasn’t any stopping it after that,” he says.

Although some growers were able to take preventative measures, others seemed to be out of luck.

“The growers that did flush, applied a residual herbicide, and then flushed again have the best crop,” Barber says. “But if we have barnyardgrass now, we’re going to have to live with it. We have spent a lot of money on revenge applications, but it likely won’t kill it.”

All is not lost, though. Many Arkansas rice fields have only small amounts of barnyardgrass, which causes minimal damage. But those with more are facing a bigger problem. Grassy rice can reduce yield.

“If it’s patches of barnyardgrass, it isn’t as much of a factor,” he says. “But if the grass is widespread, it’s a problem.”

Although weather plays the biggest role in this, there are recommendations to help farmers prevent future heartache.

“We normally get more frequent rainfall early spring than we’ve had this year,” Barber says. “But we also recommend crop rotation. Fields that have been continuous rice for many years really need to be rotated with soybean. This allows us to use Group 15 herbicides such as Dual or Zidua to help control barnyardgrass populations and reduce the seedbank.

“You’re able to use more chemistry when working in soybeans, so you really need to rotate to soybeans for two years if possible to get a handle on tough barnyardgrass populations.”

“Similar to pigweed control in soybeans, we need to lay a good foundation of residuals to reduce the overall barnyardgrass populations to manageable levels by pre-flood timings, he says.

The good news is that Provisia has been able to clean up most barnyardgrass and red rice problems in fields, Barber says.