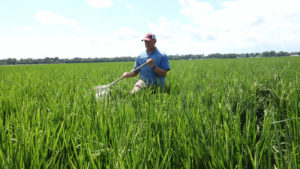 As rice begins to head in Arkansas, many producers and consultants are checking fields for rice stink bug, but their sampling technique could be costing them money.

While working on an improved treatment threshold — which indicates the density of insects per square foot — for rice stink bug, Aaron Cato, a University of Arkansas doctoral entomology candidate, came to realize that past researchers and the public haven’t been on the same page when it comes to sweeping techniques.

Rice stink bug research bases its treatment thresholds on insects captured during 180-degree sweeps, meaning the sampler swings the sampling net a half-circle from right to left, rotating at the waist.

“Previous research has used a complete 180-degree sweep to base thresholds on,” Cato says. “But with the high-yielding rice we have today, especially hybrid rice with increased tillering, if you try to walk at a decent pace while sweeping that wide, you’re going to stumble. No one in Arkansas that we’ve talked to follows that method, so everyone’s working with samples smaller than what we base our thresholds on.”

Looking at what will work

Thus began a study to find a sweep that was less taxing but still wide enough to get an accurate sample. It’s information that Gus Lorenz, Extension entomologist and associate department head of Entomology and Plant Pathology for the University of Arkansas, says could mean money in the bank for Arkansas’ rice growers. Lorenz is also Cato’s major PhD adviser.

However, sweeper variability plays a big role in whetherCato’s recommendations will translate to the samples being taken by the public.

“By reducing sweeper variability, we can be sure we’re comparing apples to apples, not apples to oranges,” Lorenz says.

Trying a trio of techniques

Sticking with a 6-foot sweep length can keep samples accurate but not at the expense of a sampler’s energy level. Cato also recommends keeping other factors in mind.

• Pace: Samplers should get 1 to 2 feet of space between each sweep.

“When you’re sweeping, be sure you’re taking at least one step, maybe multiple, at a good pace so you’re not sweeping the same area twice,” Cato says. “If you’re hitting rice that’s just moved from your last sweep, you’re going to be taking a bad sample.”

• Net placement: Sweep nets should pass through the center of the rice heads. Sweeping too high or too low can cause inaccuracies.

Net angle: Sweep nets should be slightly angled so that the top of the hoop faces up and slightly rearward.

“You want your net to be angled back a little bit so that when it does hit the rice, the rice kind of tips over into it and the stinkbugs will fall into the net,” Cato says. “If you do it straight up and down, it’s possible they’re falling out. If it’s angled downward, you’re going to be knocking stinkbugs into the water.”