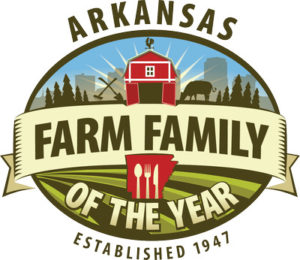 The district winners will now be judged to determine a state winner to be announced Dec. 6 at the Farm Family of the Year luncheon in North Little Rock. The winning farm family will represent Arkansas at the Swisher Sweets/Sunbelt Expo Southeastern Farmer of the Year competition October 2019 in Moultrie, Georgia.

Arkansas has had two Southeastern Farmers of the Year, Brian Kirksey of Clark County in 2008 and Wildy Family Farms of Mississippi County in 2016. All winners are judged on their farm production, efficiency, management, family life and rural/community leadership.

This year’s district winners are:

• Chris and Judy Isbell of England (Lonoke County) in the East Central District. The family raises rice on 3,000 acres. The Isbell’s rice production focuses on a variety of rice grown specifically for making sake. They have two children, Whitney and Mark.

• Jared and Lacey Standridge of Dennard (Van Buren County) in the North Central District. The Standridges operate Hartsugg Cattle Co. where they raise longhorn cattle for lease, beef cattle and show cattle. They have three children, Sydney, Sam and Shelby.

• Michael and Rhonda Ahrent of Corning (Clay County) in the Northeast District. The Ahrents have been farming for 35 years and grow rice and soybeans on 4,800 acres. Michael and Rhonda have one son, Blake, and daughter-in-law, Emily.

• Carl and Christie Campbell of Harrison (Boone County) in the Northwest District. They run a custom hay bailing and livestock operation on 4,600 acres. The family also owns and operates Cattlemen’s Livestock Auction of Harrison. The Campbells have one daughter, Melinda Logan, son-in-law Landon, and two grandchildren, Ladd and Larson.

• Dean and Tawana Watson of St. Charles (South Arkansas County) in the Southeast District. The Watsons grow rice, soybeans and corn on 2,450 acres. They also own a duck hunting lodge where they provide housing, meals and guided hunts during duck season. Dean and Tawana have one daughter, Ava Bliss.

• Travis and Valerie Sims of Center Ridge (Conway County) in the Western District. Travis and Valerie have four broiler houses and raise an average of 594,000 birds per year for Tyson. They also raise cattle. The Sims have two children, Will and Cordell.

• Damon and Jana Helton of Lonsdale (Saline County) in the West Central District. The Heltons raise grass-fed beef, forested hogs and pastured broilers. Damon and Jana also have a small market, Olde Crow General Store, where they sell food they raised. They have four children, Luke, Olivia, Violet and Elena.