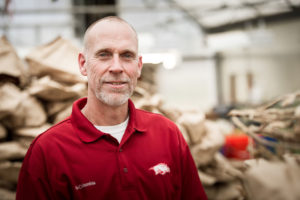 “I am thrilled about Dr. Slaton’s willingness to become a full-time member of the Agricultural Experiment Station’s administrative team,” Jean-Francois Meullenet, director of the experiment station, said Thursday in announcing the appointment. “Nathan’s experience in production agriculture and his knowledge of our statewide facilities will be invaluable to me as we make investments in our research infrastructure, develop strategies to increase research funding in the Division of Agriculture and maximize our impact in Arkansas and beyond.”

Slaton, a professor in crops soils and environmental science, had been serving as an assistant director, part-time, for the Experiment Station since 2016. As full-time assistant director, he will retain leadership at the soil test lab, as well as overseeing all of the Division of Agriculture’s analytical testing services.

Additionally, he will be acting as administrative liaison for some of the state’s commodity boards as well as the Division of Agriculture’s stations dedicated to research.

Mark Cochran, vice president-agriculture, for the University of Arkansas System and head of the system’s Division of Agriculture, says: “Since Nathan joined the division in 1989 as an extension agent, he has demonstrated strength in every phase of his career with us — through all three land grant missions of teaching research and extension.”

“Over the last few years, Nathan clearly demonstrated the qualities of a leader who can keep the experiment station strong for the people we serve.”

“I want to thank Dr. Cochran and Dr. Meullenet for giving me the opportunity to serve the Division of Agriculture and our stakeholders in a new capacity,” Slaton says. “I look forward to promoting and developing Division of Agriculture programs that advance scientific discovery by our faculty and enhance the productivity and sustainability of Arkansas producers.”

Slaton is an Indiana native raised on a small family farm near Evansville. He earned a bachelor of science degree in agronomy at Murray State and a masters and PhD in agronomy at the University of Arkansas.

In 2001, he moved to the agricultural experiment station side of the Division of agriculture as an assistant professor and director of soil testing. In 2009, he was named a professor. In 2016, he was appointed as a part-time assistant director of the station.