A hand-held ‘fuel gauge’ for rice

Arkansas rice researchers work to expand GreenSeeker use across the state.

By Jarrod Hardke and Trent Roberts

Rice production is a costly endeavor with high input costs as well as operating expenses. Anything we can do to maximize efficiency and optimize inputs is a step in the right direction.

Sustainability is really about efficiency. Being efficient with our resources and inputs will most often lead to increased yields and profits, which makes us more sustainable.

One of the highest single item input costs for rice producers is nitrogen fertilizer, which depending on your system and current urea prices, accounts for more than 10 percent of variable input costs.

Trent Roberts, soil fertility specialist with the University of Arkansas System Division of Agriculture, likes to think of it this way.

“We all know that rice cultivars are the ‘race cars’ and that nitrogen fertilizer is the ‘fuel’ that allows those cultivars to achieve top performance. But I haven’t ever seen a fuel gauge on a rice plant. Well, maybe the GreenSeeker is a handheld ‘fuel gauge’?”

Arkansas rice growers have supported GreenSeeker research by Roberts’ team through the Arkansas Rice Research and Promotion Board for the past several years. The 2017 growing season was the first wide-scale implementation of GreenSeeker use across the state in the UofA Division of Agriculture Rice Research Verification Program (RRVP) fields.

On five of the 11 fields where GreenSeeker was used, we were able to hold off on a midseason nitrogen application and still feel comfortable that we had adequate nitrogen to maximize yield. Early season rainfall was a major issue in Northeast Arkansas during 2017, and many rice fields, including some RRVP fields, were flooded or underwater for an extended period of time.

The ability to use the GreenSeeker handheld on these fields was a great benefit to make sure that any nitrogen that was lost could be applied later if the response index (RI) suggested that we needed it.

GreenSeeker put to the test for on-farm trials, too 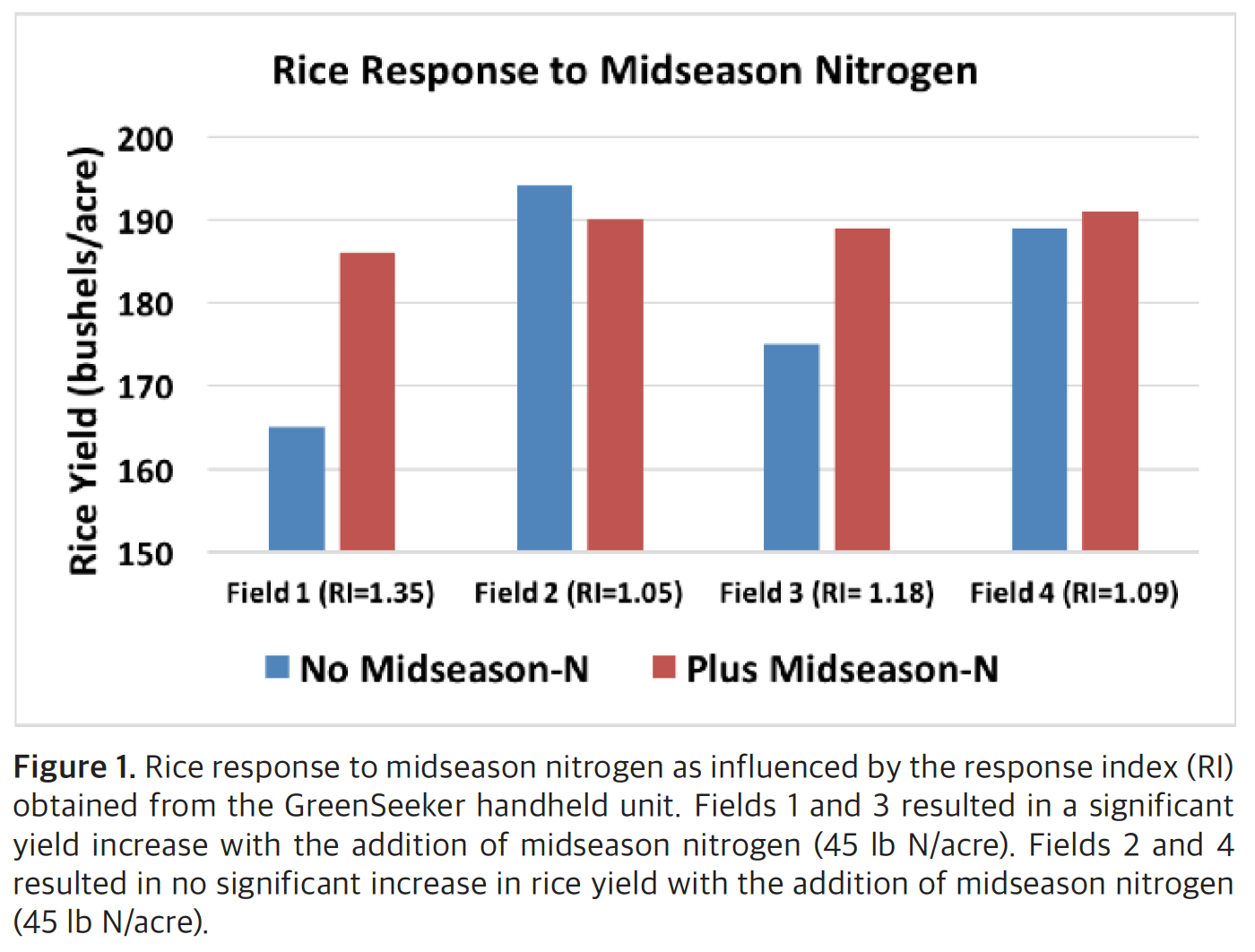 In addition to its use as a standard recommendation in RRVP fields, several on-farm trials were implemented to demonstrate how to use the GreenSeeker handheld in 2017. Four of those trials are presented in Figure 1. These data highlight how well the GreenSeeker and RI are able to identify fields that need more nitrogen fertilizer at midseason.

Typically, we would recommend applying midseason nitrogen anytime the RI number is greater than 1.15. In fields identified as Field 1 and Field 3, the RI was 1.35 and 1.18, respectively.

When we applied midseason nitrogen to those fields, we observed a significant and positive yield increase of 21 and 14 bushels per acre for Field 1 and Field 3, respectively.

You can also see that Field 1 had the higher RI and also resulted in the greatest yield increase. For the other two fields, the RI was below 1.15, and we would not have expected the midseason nitrogen to have an effect on rice yield. We are essentially saying that the field and the nitrogen-rich reference strip “looked” the same, even though the reference strip received an extra 100 pounds of nitrogen per acre.

Several consultants cooperated with county Extension agents on GreenSeeker demonstrations this past season. Mike Simmons, a crop consultant in Northeast Arkansas, worked with Greene County agriculture agent Dave Freeze to conduct some of their own research with the GreenSeeker unit.

Simmons was interested in looking at the variability using different N rates in the reference plot as well as how the GreenSeeker unit performed when held at different heights above the crop canopy.

At the end of the day, 100 extra units of nitrogen was adequate for the reference strip and the height above the canopy didn’t have any effect on the response index (RI) reading. Simmons was excited about the ability to add another tool for nitrogen management in rice, but they did mention it was one more thing to carry and keep track of in the field.

“I think we are really just scratching the surface of what we can do with the GreenSeeker and NDVI,” Roberts says. “We have some limited data using aerial imagery and NDVI from airplanes. Looking at this limited amount of data suggests that the RI approach will hold true regardless of how you get the NDVI values.”

Roberts also says that during the upcoming growing seasons, the potential exists to use a GreenSeeker handheld, a drone, a plane or maybe even satellite images to determine the RI and make decisions on midseason nitrogen management in rice.

“So, in the long run, our limiting factor is getting producers or consultants to put out those reference strips,” he says.

See related article about GreenSeeker use in California: Yet another tool

Using the GreenSeeker handheld for midseason nitrogen is as easy as:

2. Including a nitrogen-rich “reference strip” in every field and

Robert’s final advice to growers is “whether you have a GreenSeeker or not, go put out a reference strip. We have many county agents and consultants who have GreenSeeker units. We will help you take the readings — all you need to do is put out the reference strip.”

Using an RI in conjunction with a nitrogen-rich reference strip is an easy and simple way to predict nitrogen needs at midseason in rice.

More information on the use of GreenSeeker in rice and how to use the nitrogen-rich reference strips and response index can be found in the 2018 Rice Farming for Profit publication at http://uaex.edu/rice. The hard part is putting out the reference strip — and all that requires is a little extra urea and a few flags to mark the edges.