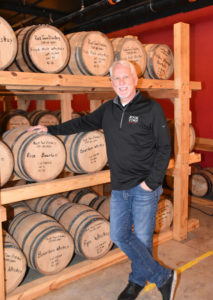 Phil Brandon, founder of Rock Town Distillery in Little Rock, Arkansas, likes to experiment with various grains, including rice, as ingredients in his bourbon — photo by Vicky Boyd

By definition, bourbon whiskey must be made in the United States and be at least 51% corn, but that means 49% can be other grains. For Phil Brandon, founder of Rock Town Distillery in Little Rock, Arkansas, the natural choice for one of his small-batch bourbons was Arkansas rice.

Opened in 2010, Rock Town Distillery is the first distillery in Arkansas since Prohibition ended Dec. 5, 1933. The operation is what’s referred to as a craft or small-batch distillery because of the small volumes and batches made one at a time. In addition to bourbon, the craft operation produces whiskey, vodka, gin, rum, coffee liqueur and moonshine.

Brandon, an Arkansas native, likes to refer to his distilled spirits as “grain to glass” or “corn to cork,” since he tries to source as many ingredients as possible locally.

The corn, for example, comes from Stratton Seed in Stuttgart, Arkansas, and is produced within the state. The rice is from Riceland Foods in Stuttgart.

Originally, Brandon had hoped to obtain whole, unprocessed rice right out of the field. When he wasn’t able to, he settled for a 2,500-pound tote of milled white rice.

By regulation, bourbon must be aged in new charred oak containers. Brandon purchases new oak barrels that have been charred over a fire to add additional flavor and richness from Gibbs Brothers Cooperage in Hot Springs, Arkansas.

“It’s kind of cool to be able to do it all Arkansas like this,” he says.

From grain to glass

Bourbon starts out as water and coarsely ground grains that are cooked to initiate the conversion of starches to sugars. The heating also releases natural enzymes that aid in degrading proteins and starches in the grain.

The mixture, referred to as mash, is cooled before yeast is added to start fermentation. The yeast organisms continue the conversion of sugars to alcohol and co-geners, or byproducts, for about three days until most of the sugars are consumed. The spent grain is given to a local producer for cattle feed.

Rock Town runs the liquid twice through a custom-built 250-gallon copper pot still to separate out the ethanol alcohol and produce an essentially clear spirit. From there, the distillate is put into new oak barrels for aging.

The amount of time bourbon remains in the barrels is not dictated by regulations or the calendar but by flavor, Brandon says. Typically, the bourbons produced by Rock Town spend 19 to 24 months in barrels.

“You do it all by taste, not by age,” he says. “We do everything so it will be ready in the shortest amount of time.”
That doesn’t mean cutting corners, as Brandon pointed to the numerous national and international awards that adorn the entryway to the distillery.

The rice bourbon was put into barrels in November 2018, and he says he expects to bottle it sometime in late 2020 or early 2021.

“I thought the raw distillate was really good,” Brandon says. “It had lemony characteristics. We’ll see how it ages up.”