Construction of University of Arkansas Foundation Seed Plant on schedule 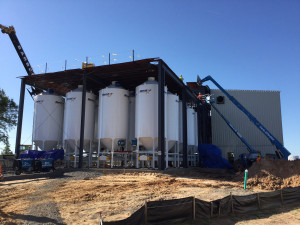 Construction of the University of Arkansas’ Foundation Seed Facility outside of Stuttgart is on schedule with a planned ribbon cutting and opening Aug. 9.

The next day, attendee’s of the Rice Expo can take tours of the new plant, which is designed to clean, sort and store dozens of varieties of rice, soybean and wheat foundation seeds. It is being built on land the university owned near the Rice Research and Extension Center.

Once operational, the new plant will replace the antiquated seed processing facility built in 1951 near the university’s RREC.

In addition to the seed tanks and seed cleaning equipment, the facility also will have warehouse space, mechanical and electrical rooms, cold storage and office space. Two docks will handle trucks, with one designed with a pit for large vehicles.

Read more about the facility on www.RiceFarming.com.