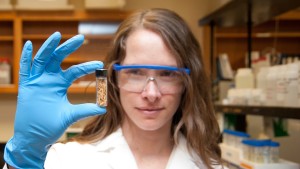 A group of researchers at the University of Delaware has found that incorporating rice husks into the soil can decrease toxic inorganic arsenic levels in rice grain by 25 to 50 percent without negatively affecting yield.

The team was led by Angelia Seyfferth, an assistant professor in the Department of Plant and Soil Sciences in the College of Agriculture and Natural Resources. The results of their work were recently published in the Journal of Agricultural and Food Chemistry.

The research built on previous studies led by Seyfferth that looked at soil incubations of rice husks, rice straw and rice ash.

The most recent study grew rice plants in soil amended with residues of rice husks, which are rich in silica. The husks contain less arsenic and promote less arsenic release from not only the tissues but also from the soil compared with rice straw.

The researchers also looked at rice ash, which is charred rice husk material.

“We used those two materials and compared the growth of rice with those materials incorporated into a soil that had background levels of arsenic and relatively low plant-available silicon,” Seyfferth said in a news release. “The big finding is that when we grow these plants in the fresh husk amended soil, we see a 25-50 percent decrease in the inorganic arsenic in the grains which is the most toxic form of arsenic. So right away, just by putting this material into soil, we can make the plants healthier and alter the toxic form of arsenic that’s in the grain which has direct implications for human health.”

Seyfferth first became interested in the role silica might play after visiting Cambodia, where she noticed that all of the above-ground plant material was removed from the fields after harvest.

“By incorporating this, we’re putting that silica back, which as we show can decrease inorganic arsenic in the grain. But it also can provide other nutrients, so maybe more phosphorous, more nitrogen as sort of an organic fertilizer without the need for more chemical fertilizer,” she said. “Then, having more silicon also makes the plants more resistant to other stresses like fungal pathogens.”

Arsenic concerns have come to light as the Food and Drug Administration recently proposed a limit or “action level” of 100 parts per billion for inorganic arsenic in infant rice cereal. This is the same level established by the European Commission for rice intended for food for infants and young children.

The two levels differ in that the FDA’s proposed guidance is for inorganic arsenic in the infant rice cereal itself. The EC level is for rice that goes into those products.

Arsenic comes in two forms — organic and inorganic — with the inorganic being the more toxic. Exposure to both chronic and acute levels of arsenic over a long period has been linked to several health problems.

Both forms occur naturally in the environment. When grown under permanent flood, rice naturally takes up inorganic arsenic, where it accumulates in plant tissues, including the grain.