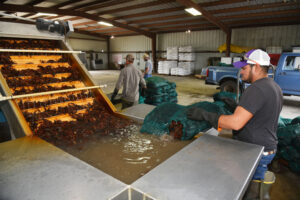 Restaurant closures in 2020 hit right as crawfish production was ramping up for the season.

The 2021 Louisiana crawfish season started off on a slow note as producers hoped to rebound from a double whammy caused by coronavirus-induced restaurant closures and last year’s series of hurricanes.

As crews return from the holidays and harvest ramps up, Louisiana State University AgCenter Extension crawfish specialist Mark Shirley said it’s unknown how much impact the previous year’s storms will have on production.

“Crawfish that were buried in levees came out, and early spawning females had young on their tails probably were killed by bad water,” he said of two week-long storm surges that hit parishes south of Interstate 10. “Some were able to find or dig another burrow. We’re seeing some young of the year show up in some of those flooded ponds. It looks better than we originally thought.”

Ponds north of I-10 where growers were able to promptly remove flood water appeared better off with average production of young crawfish during the fall. In addition to continued lower restaurant demand due to COVID-19, the state’s crawfish producers also face localized challenges from channel apple snail and white spot syndrome. Although harmless to humans, the viral disease can kill crawfish in a few days.

Shirley made his comments during the AgCenter’s recent virtual rice, soybean and crawfish winter grower meeting.

Thanks to LSU AgCenter ag economist Kurt Guidry, who documented how the pandemic hurt crawfish producers financially, they were eventually eligible for Coronavirus Aid, Relief and Economic Security Act payments. Guidry found a season-long price decline of about 55 cents per pound from the previous three-year average.

“It kind of depends on your particular situation whether you came out OK or how much behind or even if you were a little ahead,” Shirley said of the CARES payments. “But it was pretty disastrous for the coronavirus to hit right at that time at the peak of our season.”

Although early demand for live crawfish appears average this year, he said interest in peeled tail meat — typically used by restaurants — was depressed as many have closed or are serving at reduced capacity.

Crawfish harvest typically picks up as temperatures warm, with most growers finishing around Memorial Day, depending on the market and the year.

Pests to watch for

Channeled apple snails, which can grow to the size of tennis balls, continue to be a nuisance for producers. Although they don’t appear to affect production directly, they can slow harvest. 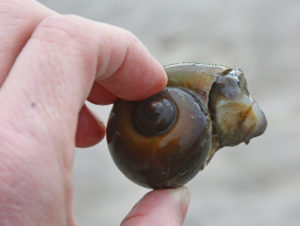 One of many channeled apple snails found in and around a crawfish farm in Acadia Parish, Louisiana — photo by Dr. Dustin Harrell, LSU AgCenter

“When they dump the traps on the sorting table, they have to pick out all of the snails,” Shirley said. Harvest crews may end up with 10 to 20 buckets of snails at the end of the day to dispose of.

The pest was first found in the Vermillion River drainage a few years ago, but it appears to be spreading slowly west to the Mermentau Basin. A few reports of the pest also have come from Calcasieu Parish.

White spot syndrome continues to be a serious concern, he said. The AgCenter veterinary school received funding to study how the virus that causes the syndrome affects crawfish metabolism.

Researchers also have collected samples of those that survived to produce offspring to determine whether a heredity factor affects immunity.

Shirley advised growers to be on the lookout and contact him if they suspect the disease in their ponds so he can collect samples. He may be reached at mshirley@agcenter.lsu.edu or 337-893-7165.

“If you have white spot virus, your catch will drop off,” he said. “You may be catching 10 to 20 sacks per day and all of a sudden within a couple of days, it drops off to one. You’ll see some large, dead crawfish floating on the pond, and that’s usually indicative of white spot.”

To ratoon or not ratoon

Shirley also continues to work on a side-by-side demonstration with two fields at the Crowley Rice Experiment Station South Farm to determine how much crawfish production is lost if growers decide to ratoon the rice crop.

During 2020, the first crop was harvested in August, while the second crop in one field was cut in November. After one year, preliminary data showed about a $100 per-acre difference between the treatments.

Shirley said he plans to repeat the demonstration this season, drill seeding the same 84 pounds per acre of the Pirogue rice variety.