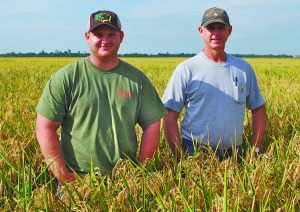 The main ingredients for their operation’s success, according to fifth- and sixth-generation Arkansas rice farmers Paul and Gil Dreher, include choosing the right varieties, investing in a grain management system, managing their water wisely and hiring a conscientious rice consultant.

“My grandfather, my dad and my uncle settled in Grady, Ark., in the early 1940s, where they later invested in a coop cotton gin and a farm near Round Lake,” says Paul Dreher. “That’s where our home place is now. Later, I farmed with my dad and uncle for about 13 years before I went out on my own in 2002. That’s when I established Yorktown Planting Co. Today, my son, Gil, and I farm 3,000 acres of rice, soybeans, corn and cotton.”

When asked how he got in the farming business, Paul’s son, Gil, says, “It’s all my family has ever done and all that I have ever done. This is my first full year back on the farm after graduating from the University of Arkansas at Monticello. My biggest responsibility in 2014 was to water all of the rice, part of the soybeans and do whatever else needed to be done to keep the operation going.”

Clearfield Technology Pays Off
In 2014, the Drehers planted about 800 acres of CL151 and CL142. Dreher likes CL151 because this variety doesn’t get too tall so there is less chance of lodging and a lot less straw to deal with at the end of the season.

“It mills well,” he says. “We are making fewer bushels than we did with other rice, but we are making up for that by drawing a premium on the milling. Plus, the way we dry our rice now gives us a little better quality.”

Dreher says he was glad to see the Clearfield technology and Newpath come along because he had a red rice problem that was escalating from year to year.

“We raised some conventional varieties, but the red rice was taking over,” he explains. “We also tried to water-seed, but that practice was too labor-intensive. The Clearfield varieties and Newpath herbicide work much better for us. Today, more farmers are planting Group 4 soybeans and cotton in April where we used to not plant those crops until late May. Newpath is easy to spray, and we don’t have to worry about killing our neighbor’s soybeans, if not our own. We try to do as much as we can with a ground rig, but sometimes we have to use a plane.”

Field-By-Field Weed Control Strategy
In addition to red rice, the Drehers have to control barnyardgrass and morningglories, but other than that, their farm is clean. To control pigweed, they switched to LibertyLink soybeans, which they rotate with corn. They also spray 2,4-D on the rice levees if pigweed happens to show up there. However, most of their land is level, so they don’t have many rice levees around to attract the pest.

“Justin Hensley, our rice consultant, determines what weed spectrum we have and what product will fit best on what acre,” Paul says. “He checks field-by-field and doesn’t just make a blanket application. Justin is real conscientious about looking at each field on its own. You might see his truck parked somewhere, but he may be looking at several hundred acres from one parking spot. I’m real impressed with him.”

On-Farm Drying And Storage
“We have 225,000-bushel capacity on-farm drying and storage, and we try to keep our varieties separate, if possible,” Dreher notes. “From the time the rice is dried until the time it is picked up, Riceland pays me 10 cents a bushel storage. Then Riceland pays for the trucking. I can’t haul my rice to Stuttgart for what they haul it for. It’s a winwin for me, and they don’t have to handle it but one time. I also do some business with Oakley Grain, and they will arrange a pick up as well.”

Dreher says one of the best investments he has made is a computerized grain storage management system.

“The OPI-Integris system that we installed in our newer bins has cut my drying time to almost half, and the grain quality is more consistent from the top to the bottom,” he says. “While the grain is drying, the air is at optimum temperature. It doesn’t overdry the grain. With this system, we don’t have to use stir augers anymore. We were seeing some milling problems with those. With this system, the rice quality is more uniform.”

Surface Water Provides Cost Savings
When it comes to irrigation, the Drehers are fortunate to have access to some surface water.

“We try to use all the warm water that we can to lessen the amount of cold-water rice,” Paul says. “It’s cheaper to pump surface water than it is to run a well. Electricity is expensive, so pumping surface water has been a big cost savings in that respect. “High pH and salt problems spurred us to move away from well water,” he explains. “We’re trying to get into a tailwater recovery system to take care of that situation. Once the water filters through the system, we feel like we lose the high pH and salt.

The OPI-Integris system that we installed in our newer bins has cut my drying time to almost half, and the grain quality is more consistent from the top to the bottom.”

“Our landlord has invested in 15-inch underground pipe and re-lifts, so we have all underground irrigation. The water can either come out of the well or out of the tailwater recovery system. It goes from the bottom to the top. Every field is tied together.”

When they go to flood, the Drehers run polypipe around the edges of the field in a side-inlet irrigation set-up and punch holes in every paddy. Paul says they have realized considerable savings and pumping time by using this irrigation method.

“Water is not an issue here,” Paul says. “That’s one thing we have really enjoyed as rice farmers. We can get to flood so much quicker. It doesn’t take us a week to get a field flooded. We can flood in about three days. That means we are not losing any herbicide to the ground cracking. When it’s time to flood, the way we have things set up, we can turn on the well plus the re-lift and put water out quickly. This helps us a lot with our grass control, and we don’t lose as much nitrogen fertilizer either.”

As these farmers have realized, the right ingredients are key to creating a profitable recipe for Arkansas rice production. 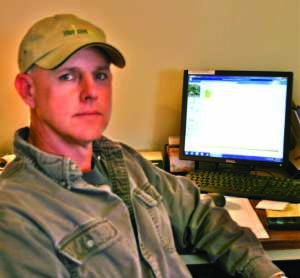 Before Paul Dreher installed the OPI-Integris computerized grain management system about three years ago, he literally had to go by his bins every day and climb to the top to try to detect hot spots.

“In the past, if I had a problem with a hot spot, or stack burn, I had to run the stir augers to get rid of it. Now, the OPI system anticipates a hot spot before it comes in, puts air on it and cools the grain down before it gets to that point. It has more than paid for itself.

“This system saves me so much time,” he says. “In the morning, I can sit here at my computer before everybody comes to work, and it will tell me if I have a problem or not. I don’t have to drive to the bins, which are 15 minutes from the office. “Also, if I am probing out of the top of the bin, I can’t anticipate when the grain will be dry,” he adds. “Whereas, this system reads the moisture and the temperature all the way through.”

Dreher says the system gives him peace of mind. If everything is not running as it should, it lets him know. For example, if a fan doesn’t come on or there is a temperature problem, the system sends his OPI representative an email. Then the representative contacts Paul, so he can send someone to go take a look.

“Before I installed this system, I may not have even known that I had a problem,” he says.

Both Paul and his son, Gil, will confirm that one of the important ingredients in their recipe for a successful rice operation is their rice consultant, Justin Hensley, who operates Arkansas Ag Specialists, LLC, based out of Dumas, Ark.

“2014 was my first year with the Drehers, and it was nice to see the three generations working together,” Hensley says. “Paul’s dad has been in farming for many years, so it’s in his blood and has been passed down from generation to generation.

“I look at their rice on a weekly basis and advise them on things they may want to consider as far as fertilizer, fungicides, insecticides, herbicides and so on,” he explains. “They know their fields better than I do because they have been farming for years, so they let me know what they think will work best for them.

“During the winter, we discuss what they are going to plant in the upcoming season. We go over variety selection, and I take soil samples in January and February,” Hensley says. “These samples give us an idea of what we need to do as far as fertilizer is concerned.”

This past season, the Arkansas consultant said the Drehers had a few fields that experienced a salt problem. According to Hensley, there is a strip of heavy, buckshot clay ground that runs through the Grady/Gould area. This particular land has some salt problems and is low in phosphorus. But if everything is managed correctly, he says, it’s pretty good rice ground.

“We had to watch those fields during the year when it got dry to make sure we kept water on them to keep the salt flushed out,” Hensley says. “It was Gil’s first year back on the farm after college, so it was his first year as the sole ‘watering man.’ I was really proud of him. He did an excellent job of watering rice on his own.”

Hensley says his responsibility is to guide the Drehers through the year, give advice and let them decide what they want to do. “They have a good operation,” he says. “They manage their crops really well and keep the fields clean. They are diversified farmers who grow some of everything – rice, beans, corn and cotton. They also started getting into cattle this year.

“Another thing that impresses me is that Gil went to the University of Arkansas, then came back to the farm, so that they are able to maintain a family farming operation.”